Harnessing the River: The Early Years

In his 1851 book, Forest Life and Forest Trees, John S. Springer wrote of the abundant manufacturing opportunities on the Androscoggin:

Respecting the water power and privileges on this river, I doubt whether there is a state in the Union that can show so many as we can on the Androscoggin and its tributaries. In the distance of half a mile on the river, at this place (Brunswick), we have [a] forty-one feet fall (three dams across the river), [and] consequently the water may be used in this distance three times. . . . The capacity of the Androscoggin is sufficient for carrying two hundred thousand spindles. . . . All that is requisite to make this river the seat of the most extensive factory operations in the world is capital, and from the superior water power here presented, it is fair to presume that the attention of capitalists may ultimately lead to investments in manufacturing on a magnificent scale.

Springer’s predictions came true, for by the end of the 19th century the Androscoggin valley was the site of some of the largest paper-producing companies in the world. But even before the Civil War, the Androscoggin was being extensively employed for industrial purposes. For example, the floating of logs downriver to be converted into lumber had been taking place for decades, with some two to three million board feet “run down” to Brunswick yearly in the decade between 1840 and 1850. Indeed, Brunswick seems to have dominated the lumber business on the middle and lower Androscoggin at this time (much as Bangor did on the Penobscot) for, according to Springer, “there are about sixty saw-mills on this river [Androscoggin] and its tributaries, thirty-two of which are at Brunswick and Topsham. However, by 1852, large lumber mills at Berlin, New Hampshire, were beginning to draw business away from Brunswick. Established by several wealthy Portland businessmen, including John Bundy Brown, J. S. Little, and Hezekiah Winslow, the mills at Berlin had access to a vast source of raw material—as well as the Grand Trunk Railway. This mill complex (later known as the Brown Company) would also evolve into one of the country's major paper-making facilities, but not before becoming the largest lumber producer east of the Mississippi by 1890, with a production of some 150,000 board feet a day.

Before closing his remarks about the Androscoggin, Springer hinted at another manufacturing industry just then emerging in the river valley when he stated, “At Brunswick, a cotton factory, with four thousand six hundred spindles is already in operation.” Although he made no mention of the fact, events were even then being set into motion that would create one largest textile manufacturing centers in the Northeast just a short distance upriver at Lewiston. At the time of first settlement by white people, many towns on the Androscoggin boasted sizeable stands of white pine that thrived in the thin soils along the river’s banks.  Eleazer Twitchell, a prominent Bethel resident, capitalized on this by acquiring large parcels of intervale land and cutting these old-growth trees, which he floated downriver to sawmills in Brunswick.  To assist in his calculation of the timber’s lumber potential, he created and had printed this “Table for measuring Logs” in the 1790s. Small, water-powered saw- and grist-mills were essential to the founding of towns along the Androscoggin and its tributaries.  In fact, many of these modest structures were the first framed buildings erected in the communities. 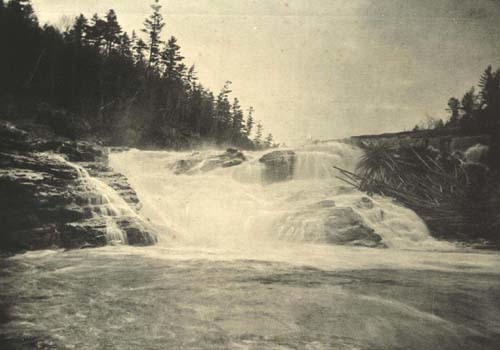 William B. Lapham’s History of Rumford, Oxford County, Maine (1890) contains this image of the “Great Falls” on the Androscoggin.  Only a few months after his book was published, a power plant was erected on the site of several early 19th century mills (on the right, out of the photo) to furnish electricity for paper companies then being built about a mile below the falls. 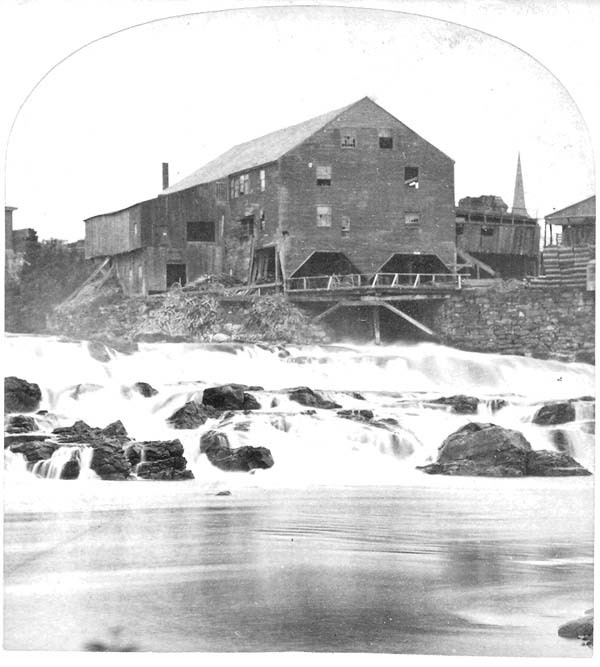 The first mill to operate on the Androscoggin was a sawmill erected on the upper dam at Brunswick between 1753 and 1761.  (The mill stood near the present site of “Fort Andross,” the former Cabot Manufacturing Company).  Located on the Lewiston side of the Great Falls, the S. R. Bearce sawmill, shown here, was one of several dozen such mills on the Androscoggin when this photo was taken around 1875.  Until the development of steam engines and railroads, sawmills depended on the region’s rivers and streams as sources of power and shipping routes.  Note the piles of waste wood in the river—an early source of pollution on the Androscoggin. This photo of circa 1900 depicts a long log drive on the Androscoggin about ten miles downriver from Bethel Hill village.  Using pick poles, peaveys, and brute strength, river drivers (many of whom could not swim) kept logs apart to prevent jamming.  The high-ended bateaux on the river bank were designed to carry men safely through rough sections of water. A frightening jam of long logs at the upper falls in Rumford in 1873.  A newspaper article published a few years before this incident declared that log jams here were “truly a wonderful sight,” and that on one such drive four million feet of logs lay there “in one immovable mass. . . . The falls are not to be seen.”  Those in charge of moving huge masses of timber down the Androscoggin and its tributaries routinely used black powder (and later dynamite) to free-up logs that could not be moved by hand.  The men who set the charge were adept in what they did; nevertheless, many fingers, hands, and lives were lost over the years.

Between 1850 and 1870, Lewiston was transformed into a manufacturing center when granite-sided canals, huge brick textile mills, and rows of brick and wooden workers’ housing were constructed just below the Great Falls.  The Androscoggin River was running high and fast when this circa 1910 view was captured. The grand plan for diverting water from the Androscoggin through a series of canals at Lewiston is well illustrated in this stereograph photo taken about 1875.  Using the same water to power, a half dozen mill installations were made possible by an influx of workers and a vast amount of capital.  Lewiston and Auburn’s populations soared upon completion of the Bates Manufacturing Company, and others like it (Auburn soon developed shoe-manufacturing as its own industry).  Most of the textile workers were of Scots, Irish or English extraction until some six thousand French Canadians relocated to Lewiston from lower Québec Province between 1870 and 1880.  This picturesque view belies the fact that raw sewage and highly colored textile waste were now pouring into the Androscoggin. The Rangeley Lakes (including the man-made Aziscohos Lake) in northwestern Maine serve as an enormous reservoir for the Androscoggin.  To regulate the flow of water in the river, and to control flooding, dams between the several lakes in this chain were erected, beginning in the 1850s.  Mooselookmeguntic Lake, from the “Height of Land” on Route 17, is pictured here. This photo, which dates from about 1900, conveys an accurate picture of the back-breaking toil involved in the construction of dams on the Androscoggin before the advent of hydraulic equipment.  A handwritten note on the back of the image reads: “Italians digging for foundation of end of dam."  The site of this dam is thought to be somewhere in the Pontook section of the River, above Berlin, New Hampshire. This section from Farrar’s Map of the Rangeley Lakes Region and the Sources of the Magalloway & Androscoggin Rivers (1876) has been highlighted to show several of the large dams constructed after 1853 to control the flow of water into the Androscoggin.  For many decades afterward, the Union Water Power Company and the Androscoggin Reservoir Company were in charge of maintaining these dams. 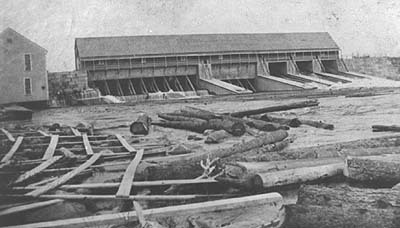 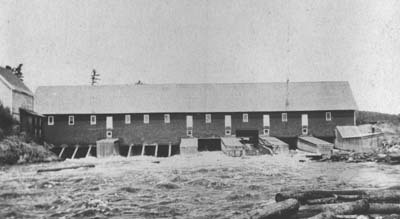 The dams that confine and regulate the flow of water from the many lakes above the source of the Androscoggin River are (top to bottom) Upper Dam, between Mooselookmeguntic and Upper Richardson lakes; Middle Dam, between Lower Richardson lake and Rapid River; Errol Dam, on the Androscoggin a short distance below Umbagog Lake; and Aziscohos Dam, erected on the Magalloway River in 1909-1911, and for a time the world’s largest concrete dam. Like Lewiston, Lisbon Falls experienced an economic boom when, in 1864, a woolen mill known officially as the “Worumbo Manufacturing Company” was built adjacent to the falls on the Androscoggin.  The town’s largest single employer before it was sold to other interests in 1965, most of the sprawling mill complex was destroyed in a spectacular 1987 fire.  The dark building on the far left was part of the Androscoggin Water Power Company saw mill. Disputes between sawmill owners and Lewiston’s textile industrialists (who controlled the company that held title to the dams on the Rangeley Lakes and the Magalloway River by 1909) were legion during the second half of the 19th century.  The Lewiston Steam Mill Company was described as a “general lumbering business” in this volume, which details the court proceedings of this 1883 case. This large sawmill was erected astride the Androscoggin at Berlin, New Hampshire, in 1897 to replace one destroyed by fire earlier that year.  With a capacity of 200,000 board feet a day, the mill was a thriving enterprise until it, too, burned in 1913.  By that time, changes in the demand for lumber in relation to that for pulp and paper had taken place in the region.  Consequently, a much smaller sawmill was constructed on the site.

Controlling the Androscoggin: From the Franklin Company to Florida Light & Power Company

Until the second quarter of the nineteenth century, the “flowage rights” (river bottom lands) on the Androscoggin were privately held by individuals who usually owned the adjacent, or “riparian,” lands along the waterway. However, with the coming of the great log drives and the development of textile manufacturing at Lewiston, the need to construct large dams to control and divert the river’s waters became essential. As one might expect, loggers and factory owners were not always in agreement as to when and how much of the Androscoggin’s flow should be released downriver, a problem that continued even after large dams were built specifically for electrical generation.

The following information from the Souvenir Program of the One Hundredth Anniversary of the City of Lewiston (1895) provides background regarding the longstanding control of the Androscoggin’s flowage rights by the Union Water Power Company (a subsidiary of Central Maine Power Company), which recently divested itself of these rights to Florida Light & Power Company, a national, investor-owned utility company.

The Great Androscoggin Falls, Dams, Locks and Canal Company was incorporated in 1836 with a capital of $100,000. It was the object of this company to develop the water power at the [Lewiston] ‘Falls.’ . . . In 1837 they procured an engineer who made a survey of the property owned by the company, and executed a plan showing the levels and profiles of different parts of the territory. . . . In 1845, the name was changed to the Lewiston Water Power Company. . . . This company made valuable additions to their real estate, and in 1849 commenced to develop the water power of the place. . . . The stock and property of the company was purchased by the Franklin Company in April, 1857. The Franklin Company was incorporated April 3, 1854, and was organized November 25, 1856, when it took possession of the property of the Water Power Company. . . . The water power privilege and the canals, together with the control of the [Rangeley] lakes, the headwaters of the Androscoggin River, has passed into the possession of the Union Water Power Company, which was organized September 18, 1878, consisting of the Franklin, Bates, Hill, Continental, Androscoggin, and Bleachery Companies.