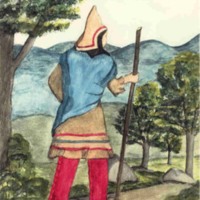 This exhibit tells the story of Molly Ockett, an Abenaki Indian of the Pigwacket tribe whose lifetime (ca. 1740-1816) spans an important and particularly tumultuous period in this region's past.  Born at Saco, Maine, Molly Ockett—baptized "Marie Agathe"—is one of the best-known individuals from the local past in the mind of the average resident of western Maine.  As an itinerant healer and herbalist for both natives and newcomers, Molly Ockett established close relations with the early settlers in such communities as Andover, Fryeburg, Poland, Paris, and Bethel during the late 18th and early 19th centuries.  Such ties enabled her to gain an intimate view of white society as it spread throughout the vast wooded domain long occupied by her ancestors. 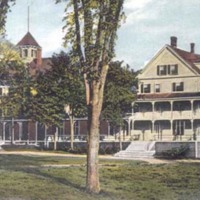 Situated in the fertile Androscoggin River valley surrounded by some of the highest mountains in Maine, the town of Bethel traces its origins to a 1768 grant made by the Commonwealth of Massachusetts to men whose ancestors had fought in a campaign to conquer Canada in 1690. Originally named "Sudbury Canada," in honor of these early grantees from the town of Sudbury, Massachusetts, and their campaign against Canada, Bethel was first settled by people of European descent in 1774. 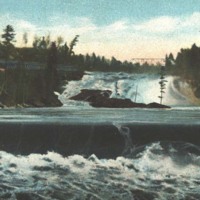 One of the largest rivers in New England and the third largest in Maine, the Androscoggin drains an area of over 3,400 square miles in Maine and New Hampshire.  The 170-mile waterway begins its journey near Errol, New Hampshire, where the outlet to the Rangeley Lakes and the Magalloway River join, and—punctuated with numerous rapids and impressive waterfalls (including that at Rumford, shown at left)—eventually mingles with the waters of the Kennebec River in Merrymeeting Bay below Brunswick, Maine, before flowing into the Atlantic.