The following material is excerpted from an exhibit that was on display at the
Bethel Historical Society from June 2, 2007, through September 9, 2011. 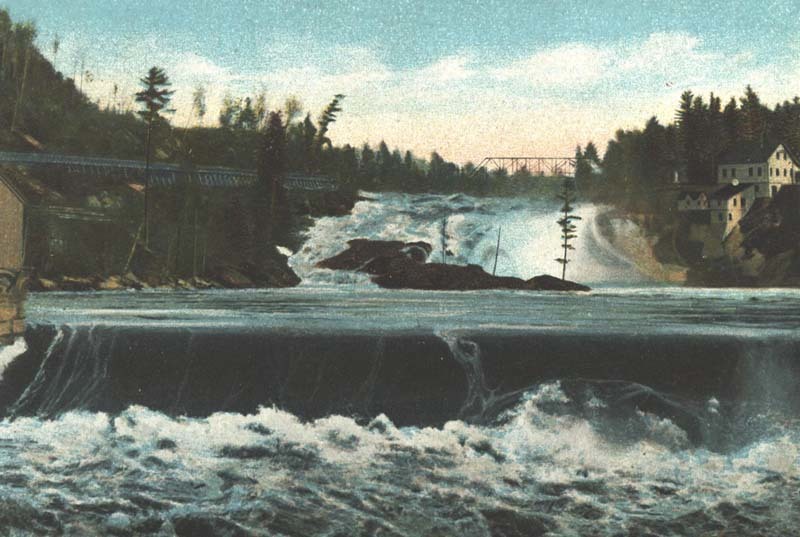 One of the largest rivers in New England and the third largest in Maine, the Androscoggin drains an area of over 3,400 square miles in Maine and New Hampshire.  The 170-mile waterway begins its journey near Errol, New Hampshire, where the outlet to the Rangeley Lakes and the Magalloway River join, and—punctuated with numerous rapids and impressive waterfalls (including that at Rumford, shown at left)—eventually mingles with the waters of the Kennebec River in Merrymeeting Bay below Brunswick, Maine, before flowing into the Atlantic.  Long used by a variety of industries to power machinery and to carry industrial and municipal waste products downstream, the Androscoggin was one of the ten most polluted rivers in the United States by the 1960s.  However, discharge regulations set by the 1948 Water Pollution Control Act and its subsequent amendments have allowed the River to make a comeback, so that in some sections (notably upriver of Jay, Maine), it is becoming a significant recreational resource for communities along its banks.

The Androscoggin River has both supported and constrained human activities along its course over a period of many centuries.  Consequently, this exhibit draws attention to the ways the Androscoggin has affected the lives of people on and around it—and how those same people have affected the Androscoggin during the river’s journey through time.  Through the use of selected images, artifacts and text, this display presents a vivid picture of the Androscoggin's past: as a transportation route for Native Americans and, during more recent periods, a watercourse for the movement of logs destined for lumber and paper mills; as a source of nutrients for agricultural production and waterpower for industry; as a conveyor of a variety of pollutants to the cold waters of the Atlantic; and as a popular destination for boaters, fishermen, artists, photographers, and nature enthusiasts.

The Great River and Its Valley →
Introduction