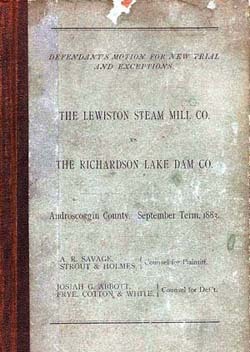 Disputes between sawmill owners and Lewiston’s textile industrialists (who controlled the company that held title to the dams on the Rangeley Lakes and the Magalloway River by 1909) were legion during the second half of the 19th century. The Lewiston Steam Mill Company was described as a “general lumbering business” in this volume, which details the court proceedings of this 1883 case.