Numerous floods on the Androscoggin have been commonplace over the centuries. In more recent times, the construction of dams to control the river’s flow during periods of high water has been of tremendous aid to those residing or working near the waterway. Nevertheless, the 1987 freshet caused much damage in parts of the river valley, notably in the town of Canton, which, after a detailed study by FEMA, has decided to relocate a number of structures in its main village to higher ground.

The watershed of the Androscoggin, consisting largely of steep and barren mountains, including the easterly slopes of some of the White Hills, is such as to cause the volume of water in the river to increase very rapidly during severe rainstorms and spring freshets, the rise often amounting to one foot per hour for several successive hours, the banks soon becoming overflowed and the broad intervales presenting the appearance of a raging flood. 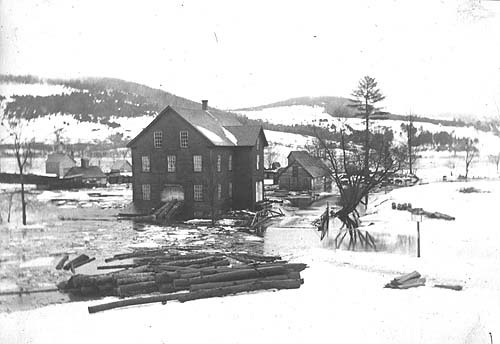 Flooding in the nearby town of Hanover was severe in March of 1896.  The Hanover Dowel Mill is shown in this photo, with the Androscoggin in the background. 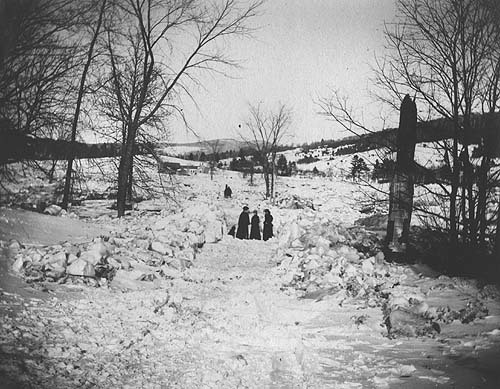 The main “highway” leading from Hanover village to Rumford Point (now Route 2) was blocked by chunks of ice after the flood of 1896.  Much hand labor was needed to re-open this section of the road. 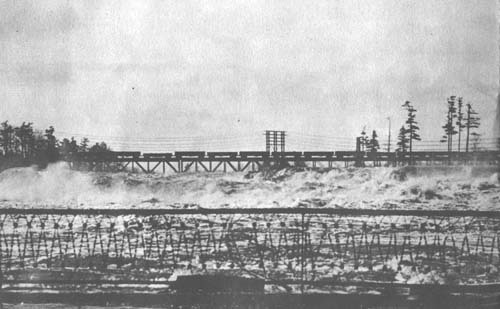 During the famous 1936 flood, the Maine Central Railroad placed cars full of gravel on its bridge above the Great Falls at Lewiston-Auburn to prevent the span from being washed downstream.  The scheme worked and the bridge is still there today!

Major Floods on the Androscoggin River

1723 — The earliest recorded “freshet” on the Androscoggin occurred in February. The river was “open not only below but even to the falls thirty miles above Pejepscot” (Brunswick/Topsham).

1784 — In the autumn of this year, high water lifted the barn of Andrew and John Dunning, of Brunswick, off its site on the intervale and carried it intact until it reached the falls.

1785 — In October, “the greatest freshet ever yet recorded on the Androscoggin River” damaged or destroyed many low-lying houses and farmstead from Bethel to Brunswick.

1826 — On August 30, “the most unexpected and rapid rise of water in the Androscoggin occurred that had ever been known. In Livermore and Jay the water rose eight feet in one night.” A number of mills were damaged and ferries swept downstream.

1839 — A February “ice freshet” carried away dams, log booms and mills on the river. The open-truss pier bridges at Bethel and Rumford Point were also destroyed and replaced with ferries the following year.

1869 — In the “Pumpkin Freshet” of October 5, thousands of pumpkins were carried into the Androscoggin River via its tributaries, creating a sight long remembered by valley residents.

1896 — A March flood forced thick cakes of river ice over roads and against bridges, causing much damage. Railroad tracks near the river were undermined and telephone lines in the Bethel area brought down.

1927 — Several days of torrential rain during November resulted in high water along major waterways in Maine, New Hampshire, and Vermont. Damage and loss of life was greatest in the latter state.

1936 — Heavy rains in mid-March combined with spring snow melt to produce what has been called “Maine’s greatest flood.” Considerable property damage occurred throughout the Androscoggin valley.

1953 — Despite record runoff, the late March 1953 flood caused less damage than in 1936 due to the absence of ice jams and moving ice. “The discharge of the Androscoggin at Auburn was the second largest since 1850 and probably since 1785.”

1981 — Rains lasting several days in February caused the Androscoggin to overflow its banks, resulting in numerous ice jams on the narrower sections of the upper river.

1987 — On April 1, the worst flooding in Maine in half a century was brought about by melting snows and driving rain. Entire sections of communities along the Androscoggin were cut off as bridges washed out and roads were submerged.

← The Paper-Making Era: Power and Pollution
Cleaning Up the River: Challenges, Opportunities and Achievements →
Freshets of Consequence: Androscoggin River Floods