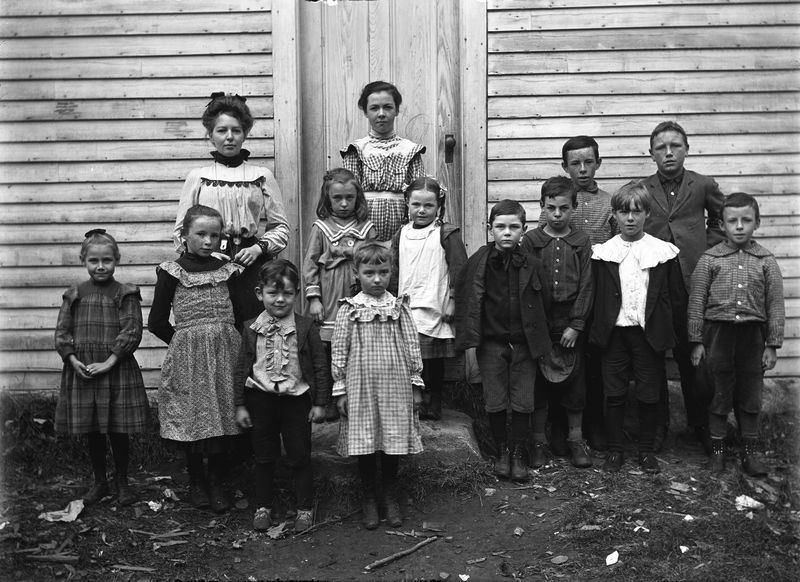 Author's Note: Much of the information provided here, including the map was provided by Nellie Harrington Capillon and John Harrington, children of Michael Harrington and grandchildren of Patrick Harrington, one of the first settlers of the Irish Neighborhood, and I wish to thank them. I also appreciate the assistance received from Mrs. John Deegan, Abby Buswell and Richard Carter. I wish particularly to thank my mother. Pearl Ashby Tibbetts, for her memories and insights.

When you leave Bethel by Vernon Street the town line between Bethel and Greenwood is about two miles from the village, very near the junction of Paradise Road with the extension of Vernon Street. A short distance beyond the town line there is a road off to the left which climbs the back of Mt. Abram to a small settlement, the Irish Neighborhood. The Irish Neighborhood is in Greenwood, but Bethel is the nearest village.

Halfway up the hill, which is steep, on the right, off the road about forty yards, is a small and lovely cemetery. This cemetery was bought by Patrick Harrington and Patrick Connelly for use by the Catholic families of the Neighborhood. Five generations of Irish and their descendants are buried there. Last June Mother and I walked down to the cemetery from the road; on either side ladies' slippers grew in profusion. Near the top of the hill the road breaks to the left to the Harrington homes, the last of the farms still occupied by the descendants of one of the original settlers of the Irish Neighborhood. The view from the top is magnificent.

I can remember going with my father when he paid calls in the Irish Neighborhood, probably in the late 1920's. The road was steep, narrow and hard for the old Ford. The Irish Neighborhood families were favorites of my father, Dr. Raymond R. Tibbetts, who was proud of the touch of Irish in his own background. He was particularly fond of the Harringtons, but he had good friends all over the Neighborhood. He relished their wit and much enjoyed it when Bernard Harrington teased him about being a Republican. (No one was ever a stronger Republican than the Doctor; the Irish Neighborhood, on the other hand, had many good Democrats). But, best of all, the Doctor appreciated the loyalty and tenacity of the Irish in the Neighborhood. They stuck with their friends and were proud of their heritage.

They had a right to be proud. The establishment and maintenance of the Irish Neighborhood took hard work, thrift and courage. In the late 1840's two terrible famines, resulting from failures of the potato crop combined with staggering insensitivity on the part of the British Government to the sufferings of the Irish, sent hundreds of thousands, eventually more than a million, Irish away from their starving island. Most of them came to the United States, many disembarking at Boston, the first port touched. Those who came were predominantly young and strong enough to raise the fare and to seek a new life. Their arrival coincided with the expansion of the railroads in the United States. The Irish brought what the railroads needed - young strong laborers eager for jobs and ready to travel for work. When the railroads came through this part of Maine the Irish came too.

The 1850 census (the year before the railroad came to Bethel) lists more than 100 names with Ireland as the place of origin and "laborer" as occupation. These 1850 names do not include names familiar to us as Irish Neighborhood names, and of course the majority of workers would stick with the railroad as it moved along. Eventually some were to stay. In December, 1884 an Oxford Democrat correspondent, Lemuel Dunham, wrote of a trip he had made to Greenwood and gave this version of the origin of the Irish Neighborhood:

The Irish Neighborhood lies in the Northwest corner of Greenwood, about three miles south of Bethel Hill and joins Albany. Mr. Flarity (Flaherty) came from Ireland with a small family nearly forty years ago, went to work on the G.T.R. (Grand Trunk Railroad) at Mechanic Falls and followed it as far as Gorham, when he left it and bought a farm in this neighborhood, on to which he moved his family. The farm was considered a poor one hardly worth the name, as several Yankees had been on it and got starved out. When Mr. F. commenced on it he had no team, and instead of hiring one to do his ploughing, he dug the ground up with a spade, threw the brake roots into heaps, then burned them and used the ashes for manure. He soon began to prosper as he deserved to until his children numbered ten and he erected a good set of buildings. He is now about 74 years old and lives with one of his daughters, who married a Diggins (Deegan): they have two children. I have noticed this family more particularly as it was the first one which came to this neighborhood.

The name Thomas Flaherty appears in Greenwood on the Oxford County wall map of 1858.

Within the next few years other Irish families came, probably under much the same circumstances. By 1884 there were nine families in all; the map in this issue from memory represents the Irish Neighborhood as it was about 75 years ago and there are ten Irish names indicated (there were also Yankee families in the Neighborhood, probably the Swans and Thomas Smith). Old Tom Flaherty died in 1901 aged 92. My mother remembers some of the original Irish settlers who were still alive at the time of World War I. There was "Red" Lydon and "Black" Lydon - the red Irish and the black Irish are the two best known physical types - and their wives, all of whom spoke with a brogue. The Oxford Democrat visitor of 1884 spoke of the Irish families with respect. "John Gill," he wrote, "is an industrious farmer who has a good farm. His wife is an educated lady, having attended English schools before coming to this county…The family consists of nine children, five sons and four daughters." (This John Gill was Abbie Gill Buswell's Grandfather; one of the four daughters, Molly Gill, was to have a fine dress shop in Boston). In the Oxford Advertiser of January, 1884 a correspondent notes that in the Mt. Abram district "the people here are nearly all Irish and they are a thrifty set, and can outdo the Yankees every time raising potatoes."

If one checks the dates on the markers in the cemetery it is clear that the Irish on Mt. Abram were a hardy group. Nearly all of the original settlers were in their late 80's when they died, except for those in their 90's. My mother remembers when my father operated on old Bartley Lydon for a strangulated hernia; Bartley Lydon was already ninety and the operation was hazardous but my father had no choice. The patient lay on the kitchen table, my father operated, mother gave the anesthetic and young Bernard Harrington held the lantern. The following day old Bartley sat up in bed and called for his pants and his pipe. He lived several more years. After the operation when mother went out to catch her breath and walked down the road from the farmhouse, the partridges flew up on either side as thick as robins.[1]

In addition to farming -- always difficult on the small hill farms -- a good number of men in the Irish Neighborhood worked as laborers and in lumbering. For many years Joe Harrington, one of the sons of Patrick Harrington, provided the wood for Gould Academy -- 25 to 40 cords a year. In 1914 he received $4.75 a cord. Society member Richard Carter tells of Bill Deardon who was a famous ax man. It was considered standard for two good men to cut 5,000 feet of pine in one day but, if necessary because of a man's absence, Bill Deardon could cut 5,000 feet by himself.

The original settlers must have talked among themselves of the old country at times, but since they did not necessarily all come from the same area common memories would be limited. The young people, of course, grew up with memories only of this country. A unifying characteristic of all, however, was that all were Catholics. There was no Catholic Church near - but a priest came regularly to the Irish Neighborhood, meeting in people's homes; he probably came more often in the summer months. The Oxford Democrat visitor commented that the Irish "claim the right to their own religion, but they do not try to impose it upon others."

The school, of course, would be another unifying factor, for the children attended the very small one room school beside the cemetery. In 1884, there were 22 pupils; Ella Herrick (Barbara Herrick Brown's aunt) was the teacher. After finishing at the Irish Neighborhood school the students went to Gould Academy, as did all Greenwood children in those days.

Today, once past the fork where the road turns toward the Harringtons, the Irish Neighborhood is almost completely grown up to woods with only abandoned cellar holes and a rough logging track to penetrate the trees. All over this section of the country the process of moving down from the hills to be nearer town began in earnest after World War I. Bad roads were harder on automobiles than on horses, and the old farms were a hard way to make a living. Young people wanted to be nearer work and to be nearer town. It was the same with the Irish Neighborhood. Most of the young people of the large Irish Neighborhood families had taken it for granted that they had to move out to seek work; many had gravitated towards Portland and Boston where there were better markets for their labor. Some settled nearer Bethel village. As the older settlers died, the farms in the Irish Neighborhood were slowly abandoned. In at least one case, that of John Gill, fire destroyed his farm buildings in 1926 and he moved to Bethel.

The Irish Neighborhood remains, in name, in descendants and in tradition. There are still Harringtons on the land bought with Patrick's hard earned gold. There are Deegans and Kennaghs living and working in the Bethel area. Abby Gill Buswell who was born in the Irish Neighborhood lives in Bethel. Society member Barbara Hulbert Merrill who lives in Hanover is the daughter of Grace Deardon Hulbert. From those small old cellar holes and those poor little farms came good citizens for the Bethel area. The Irish of the IrishNeighborhood have a justified pride in the contribution of hard work and courage which their ancestors brought to this area. 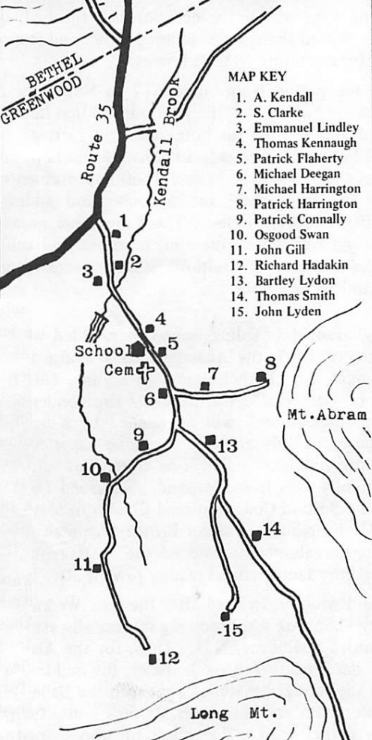 [1] Vital records from the Town of Greenwood show Bartley Lydon died on September 10, 1916 at the age of eighty-five. His age was probably eighty, rather than ninety at the time of the operation.