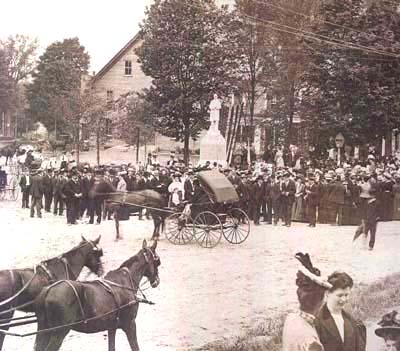 The year 2008 year marked the centennial of the dedication of Bethel’s Civil War Soldier’s monument on Memorial Day 1908.  The account of this event in the 4 June 1908 edition of the Bethel Citizen captures some of the patriotic fervor it must have stirred in the hearts of many of those in attendance.  As the Citizen reported: “Every fluttering flag waved patriotism and every heart throbbed with love of country.”  The newspaper continued: “It was a glorious day and we cannot be too grateful to the enthusiastic mind which conceived it and the loyal workers who cooperated in carrying the plan to such a happy consummation.”

The parade numbered over 400 that included the twenty-five piece Rumford Falls band, speakers and municipal officers, Civil War veterans, a large group of women, school children with flags waving, “scarlet shirted firemen, and finally citizens of Bethel and environs.  The procession was marshaled by Major Adelbert Twitchell of Newark, New Jersey, who was mounted with A. S. Chapman and Augustus M. Carter, comrades of his old battery.  Also mounted was Fred L. Edwards, son of Col. Clark S. Edwards of the Fifth Maine.  Joining in the group were Ira C. Jordan, A. M. True, T. M. Bean and Brown Post, Grand Army of the Republic Commander A. H. Hutchinson.  The procession began at Gould Academy on Church Street, marched around the Common, down Broad Street to Main Street to the monument.  The whole village was decked in flags and patriotic bunting.  At the monument, the veterans and Relief Corps gathered along with the school children and were flanked by over 2000 citizens in attendance.  A speaker’s stand had been erected at the side of the monument where space was provided for seating the speakers, clergymen, municipal officers and guests—approximately twenty in all.

After a number from the band, the Rev. William Curtis of the Bethel Congregational Church led the assemblage in prayer, followed by a patriotic song featuring the school children under the leadership of Bessie Andrews.  Next came Ellery C. Park, attorney and presiding officer, who presented a short address that was enthusiastically received.  He paid tribute to the sacrifices of the Civil War soldiers from Bethel and to all those who had made the monument possible.  Brown Post Commander A. H. Hutchinson was then summoned for the unveiling of the blue granite soldier’s monument, which was purchased for $1550 through public subscription and town appropriation from the Smith Granite Company of Waverly, Rhode Island.  Prior to that, he spoke movingly of the Bethel Civil War veterans and their esteemed commander, Col. Clark S. Edwards, whose daughter, Nellie Edwards Phipps, was called upon to officially pull the string, causing the flag to drop from the monument as the band struck up the national anthem.  E. C. Bowler, editor of the Citizen, was the next speaker.  He provided a short address on the importance of citizenship in a democratic republic.  Bowler was followed by Alfred M. True, son of Dr. Nathaniel Tuckerman True, who recalled the Bethel soldiers of ’61 to ’65, and the spirit of those days that stirred the hearts of young men and led them to the front to defend the Union.  He remembered some of the Bethel “boys” as “touched by the spirit of the hour and went forward to rank among the bravest and truest soldiers of that terrible war.”  Sarah E. Putnam, a former resident and prominent figure in State and National Women’s Relief Corps work, was then introduced and spoke briefly of the work of the Corps.  She recounted all the instances of assistance the Corps had provided veterans since its organization in 1883, totaling between three and four million dollars of relief work.  The next speech was ably delivered by Maj. John Mead Gould of Portland, who distinguished himself after the war as a gifted writer and speaker.  His brief address was especially formulated for all the children present.  The program ended with the Marshall of the event, Maj. Adelbert Twitchell, who gave a very touching valedictory to the Old Soldiers present and his fellow comrades, which “stirred the hearts of many to tears.”  A “camp fire meeting” at Odeon Hall in the evening continued the spirit of the day, with E.C. Bowler, the president of the Monument Committee, serving as master of ceremonies.  A prayer was offered by Rev. Banghart of the Methodist Church after which Judge Addison E. Herrick was introduced and thanked everyone who had made the monument possible, expressing appreciation for the impressive ceremonies of the day.  Then came the “camp fire,” where Post Commander Hutchinson, A. S. Chapman, Maj. Twitchell, E. P. Twitchell of Minneapolis, Minnesota, J. H. Barrows, A. M. Carter, H. C. Barker, A. M. True, George L. Grover of Harrison, and Maj. J. M Gould spoke from the stage, recalling some of their war memories.  Rev. Frank Mansfield closed the evening with a patriotic address.  Band and choral music was interspersed between the speeches throughout the evening.

John Mead Gould, one of the featured speakers of this dedication, was born in Portland, 15 December 1839, the son of Edward and Althea C. Gould.  He was educated in the public schools of Portland and at Gorham and Gould’s academies.  At the age of twenty-one, he enlisted in the Portland Light Guards ten days after the outbreak of the Civil War.  After a year’s service, he was promoted to second lieutenant and was made a major in 1864.  During the war, he took an active role in the battles of Winchester, Cedar Mountain, Antietam, Sabina Cross Roads and several others, finally being discharged in 1866, a year after the end of the war.  Returning home to Portland, Major Gould became connected with the National Traders Bank as a teller, a position, which held until the death of his father, Edward Gould.  He then assumed the cashier’s post, serving in that role until 1908 when the bank was absorbed by Fidelity Trust.  He married the former Amelia J. Twitchell, who died in 1926, and they were the parents of three children.  In 1871, Major Gould wrote a history of the 1-10-29 Maine Regiment’s Civil War service, credited to be one of the best histories of the regiment’s activities during the war, for which he was highly praised by President Rutherford B. Hayes.  Very active in the Portland community, he was long associated with the Second Parish Church and the Seaman’s Bethel Church, as well as relief work in longshore and Italian mission causes.  A gifted speaker, he often addressed congregations in the greater Portland area.  He was a member of the Bosworth Post, Grand Army of the Republic of Portland.  An avid collector of Civil War books and materials, he was believed to have the finest library of war books in the State of Maine.  Following his retirement, he devoted much of his time to the outdoor study of nature, serving at one time as the president of the Portland Society of Natural History.  He was survived by his two sons, two sisters and a brother.  A daughter, Annie Alexander Gould, was a missionary to China from 1893 to 1900, when she was murdered on 1 July 1900 in Pao-Ting-Fu during the Boxer Rebellion.  His funeral was held at the Seaman’s Bethel Church and burial was in Riverside Cemetery, Bethel, Maine.  He kept a diary for much of his life, beginning with his student days at Gould Academy in the 1850s.  During the Civil War, he sent his diary entries to his lifelong friend, Edward Sylvester Morse, the famed zoologist, who carefully preserved them, and they were later published in book form.