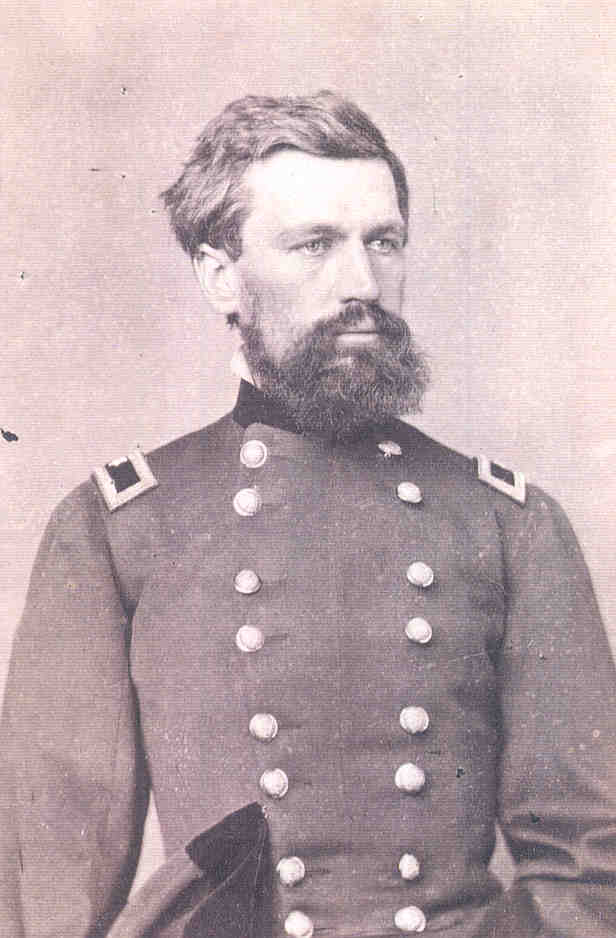 Civil War General Oliver Otis Howard spoke at Bethel on the afternoon of 15 July 1862 at the Bethel House and later at a pro-Union rally in Pattee’s Hall (razed in 1979) on Spring Street. During that day, elections for officers of three Bethel militia companies under the direction of Major Frye of Lewiston were held. General Howard addressed these companies from the piazza of the Bethel House, which stood on a very visible location overlooking the Bethel Hill Common. During the evening, at a gathering in Pattee’s Hall, the General was greeted with “a storm of applause.” Injured early in June 1862 at the Battle of Fair Oaks, Howard's right arm had to be amputated. He spent the next eighty days recovering and touring his native Maine in support of the Union war effort. In the account of the event recorded in the Oxford Democrat, published at Paris, Maine, on 25 July 1862, it was noted that it was obvious he was suffering considerable pain from his wound, but he managed to keep the audience “spellbound as he portrayed the condition of the army and wants of our country.” This report continued, “He was constantly interrupted with applause from the audience and succeeded in inspiring in all a greater love of country.”

Howard was followed by Major Frye of Lewiston, who made an eloquent speech during which two large American flags were brought into the room. It was reported that the effect of this action was “electric.” According to the account in the Democrat, it seemed “as though everyone was ready to fight for it [the flag] and under it and the Major made a most happy impression upon all.” At the close of his remarks, a committee of seven was selected to assist the local Sanitary Commission chaired by David F. Brown (1812-1883) in supplying the troops. It was also announced that subscriptions would be raised to give $50 to everyone who enlisted under the present call of the President, in addition to that furnished by the State.

The column continued, “Gen. Howard spoke in the highest terms of the discipline of the Bethel soldiers on the Potomac, and of the faithfulness of Captain [Clark] Edwards in the discharge of his duty. Cheers were then given for the speaker, for the Union, for the President, for General McClellen, when the meeting adjourned.” “It was,” concluded the Democrat columnist, perhaps with some measure of hyperbole, “the most enthusiastic meeting ever in Bethel.”

Oliver Otis Howard was a Maine man, born in Leeds in 1830. A graduate of Bowdoin College (1850) and the U.S. Military Academy (1854), he served in the Seminole War before becoming a mathematics instructor at West Point. He resigned this position in 1861 to become a colonel in the Maine Volunteer Regiment, where he participated in many battles of the war, including Antietam, Chancellorsville, and Gettysburg. During the Peninsular Campaign of 1862 at Fair Oaks, he was wounded and lost an arm. He later served in Tennessee and with Sherman in his March to the Sea and the Carolina Campaign.

In 1865, Howard was selected by President Andrew Johnson as Commissioner of what became known as the Freedman’s Bureau to provide for black southerners freed during the War. Also instrumental in establishing schools and colleges for former slaves, he was active in the founding of Howard University in 1867, which was named in his honor and where he served as president from 1869-1873. He later was involved in peace negotiations with the Apache Indians and two years later led military campaigns against several tribes of Pacific Northwest Indians. Following this engagement, he served briefly as superintendent of West Point and held commands in several parts of the nation, retiring with the rank of Major General. He lived the rest of his life in Burlington, Vermont, where he was a popular lecturer and author before his death and burial there in 1909. For more information about Howard, see his Autobiography (1907), John A. Carpenter's Sword and Olive Branch: Oliver Otis Howard (New York: Fordham University Press, 1999), and William S. McFeely's Yankee Stepfather: General O. O. Howard and the Freedman (New Haven, CT: Yale University Press, 1968).