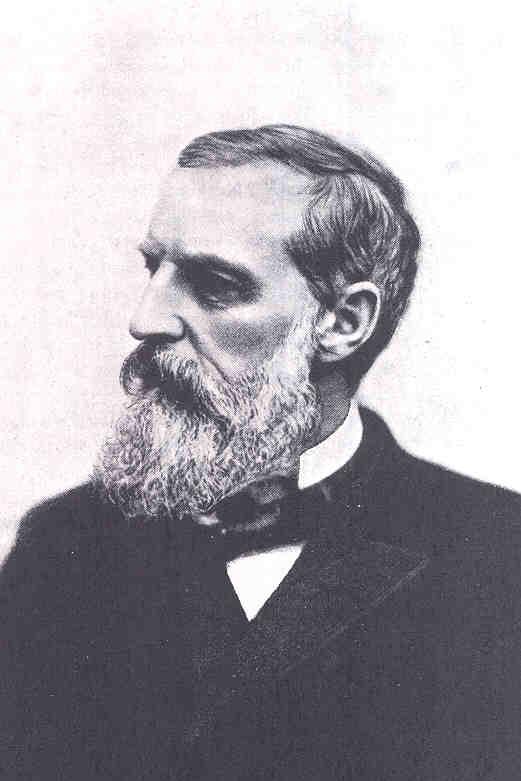 Born in Bethel, Maine, on 29 November 1823, the third son of Dr. John and Fanny Lary Grover, Lafayette Grover was educated at Gould Academy and Bowdoin College. He studied law in Philadelphia under the tutelage of Asa I. Fish and was admitted to the Pennsylvania bar in March 1850. Later that year, Grover, moved by the California “gold fever” frenzy, boarded a merchant vessel bound for San Francisco via Cape Horn. He arrived at his destination in July 1851. Within a month, however, he departed for Portland, Oregon, on the steamer “Columbia.” From there, he proceeded to Salem, the capital of the territory, where he established his law practice. He soon had an invitation from Chief Justice Nelson, who presided over the first regular term of the United States District Court, to accept a position as temporary clerk, an office he held for six months. During that time, he became acquainted with local court procedure as well as jurors, witnesses and litigants.

Upon resigning his clerkship, Grover formed a law partnership with Benjamin F. Harding, who later became United States Attorney, Secretary of the Territory, and United States Senator. He and Harding enjoyed a very lucrative law practice for several years. In 1852, Grover was elected by the Oregon Legislature as the Prosecuting Attorney of the second Judicial District of the Territory, which extended from Oregon City to the California line. The next year, he was elected to the Territorial Legislature. That summer of 1853, hostilities arose between the Rogue River Indians and the local settlers. Grover was appointed by Governor Curry as recruiting officer to raise volunteer troops to assist the settlers against the Indians. He quickly recruited a force, which mustered at Salem under the command of J. W. Nesmith, who later became United States Senator from Oregon. Grover was given the rank of First Lieutenant. These troops, accompanied by a pack train with arms, ammunition and supplies, hastened south to aid the besieged settlers.

At the close of hostilities in September 1853, Grover appeared in court as Deputy United States District Attorney in the southern counties, then held for the first time and presided over by Judge Matthew P. Deady. Congress assumed compensation of the settlers whose property was destroyed by a hostile Indian attack in the Rogue River Indian War of 1853. Grover was appointed one of the commissioners to assess the damage, serving as President of the Board in 1854. He returned to the Legislature from Marion County the following year and was selected as Speaker of the House during the 1855-56 session.

During this time, the combined Indian tribes from the California line to the British (later Canadian) boundary attacked the settlement in a determined manner throughout Oregon and Washington. Two thousand volunteers were called into the field to cooperate with the regular forces to suppress the attack. In this movement on the part of Oregon, Grover assisted in raising troops and served in the field on the staff of Col. Nesmith throughout the Yakima campaign.

As a result of all this turmoil, the people of Oregon resolved to draft a constitution and apply for admission to the Union as a state. The voters of Marion County selected Grover as a member of the convention, which was convened for the above purpose at Salem in 1857. In that body, he served as chairman of the Committee on the Bill of Rights as well as other significant committees, and took an active and leading role in the deliberations. Following the drafting of a constitution, general elections were held. Grover was elected as the first representative to Congress from Oregon. The chief work of the Oregon delegation at that time was to secure Oregon’s admission to the Union and the federal government’s assumption of the Indian war debt.

Following his service in the Thirty-Fifth Congress of the United States, Grover devoted himself to largely professional and business pursuits. He formed what became a highly successful law partnership with Joseph S. Smith at Salem, who later served in the U.S. Congress from Oregon. Subsequently, the partnership was extended to Portland to include Judge W. W. Page.

As time passed, Grover took an increasingly strong interest in the development of manufacturing in Oregon. In 1856, he assisted in organizing the Williamette Woolen Manufacturing Company of Salem. He also became active in the Santium River water power project, where he remained for fifteen years and attained great success. In 1860, Grover purchased the shares of Joseph Watt in the Santium River project and became the owner of one third of all the mills and water power

of Salem. From 1867 to 1871, he served as manager of the company. Under his direction, the Salem flouring mills were completed, including the installation of all the machinery and works, plus the construction of a steamboat canal from the river to the mills. This operation was a great stimulant to the growth of other business enterprises, particularly wheat and wool raising in Oregon.

Presiding over the Democratic State Convention in 1866 as the chairman of the Democratic State Committee, a post he held for four years, Grover brought the party to ascendancy to compete with Oregon Republicans. His partisanship was often excessive and as a result he was both feared and heartily disliked in some circles of the population of his adopted state.

In 1870, he was elected as Oregon’s Governor and re-elected in 1874. He served as Governor until 1877 when he resigned to enter the United States Senate following his election by the legislative assembly. As governor, he was fiscally conservative, but entrepreneurial in outlook, supporting key projects that would benefit the state’s economy. During his gubernatorial tenure, the State Capitol and other public buildings were constructed. He raised educational standards and oversaw the establishment of the state university. His policies encouraged immigration, low taxes, and prudent industrial development.

His most notable historic role was played during the dispute over the 1876 presidential election when Republican Rutherford B. Hayes and Democrat Samuel Tilden were vying for the White House in a contested election. Oregon was one of the key states where the contest was in question. As Governor, Grover refused to certify the elector who was to cast a decisive vote since Oregon was one of the states holding the balance of power in the Electoral College. Grover’s attention was focused on one of the three Republican elector candidates, John W. Watts, a postmaster. The Governor maintained that the fact Watts worked for the post office disqualified him. Grover urged that he be replaced by the next name on the list, E. A. Cronin, a Democrat. He prepared an elaborate brief for the Electoral Commission that was established to determine the members of the Electoral College. The Commission overruled Grover’s attempt to appoint Cronin, so this fact contributed to the one vote margin in the Electoral College that made Hayes President of the United States. Grover’s partisanship brought the threat of mob violence; he also encountered petitions being circulated against his seating as a United States Senator. He overcame this opposition, however, and served respectably during his one Senate term.

Although his career as a lawyer and businessman had been highly successful, his retirement years were not prosperous ones. He mismanaged his affairs to such an extent that he lost his fortune and was forced to live in humble circumstances. As a result, he was almost entirely forgotten at the time of his death on 10 May 1911. He married Elizabeth Carter of Portland, and they were the parents of one son, John Cuvier. A genial, intelligent, and literate individual, Lafayette Grover can be characterized as one with a keen mind, who possessed excellent legal training. His excessive partisanship, however, marred his political career and affected the historical assessment of his achievements as U.S. Representative, Governor and U.S. Senator. He died in Portland, Oregon, and is buried there in Riverview Cemetery, an entire continent away from the little town in Maine where his life began.