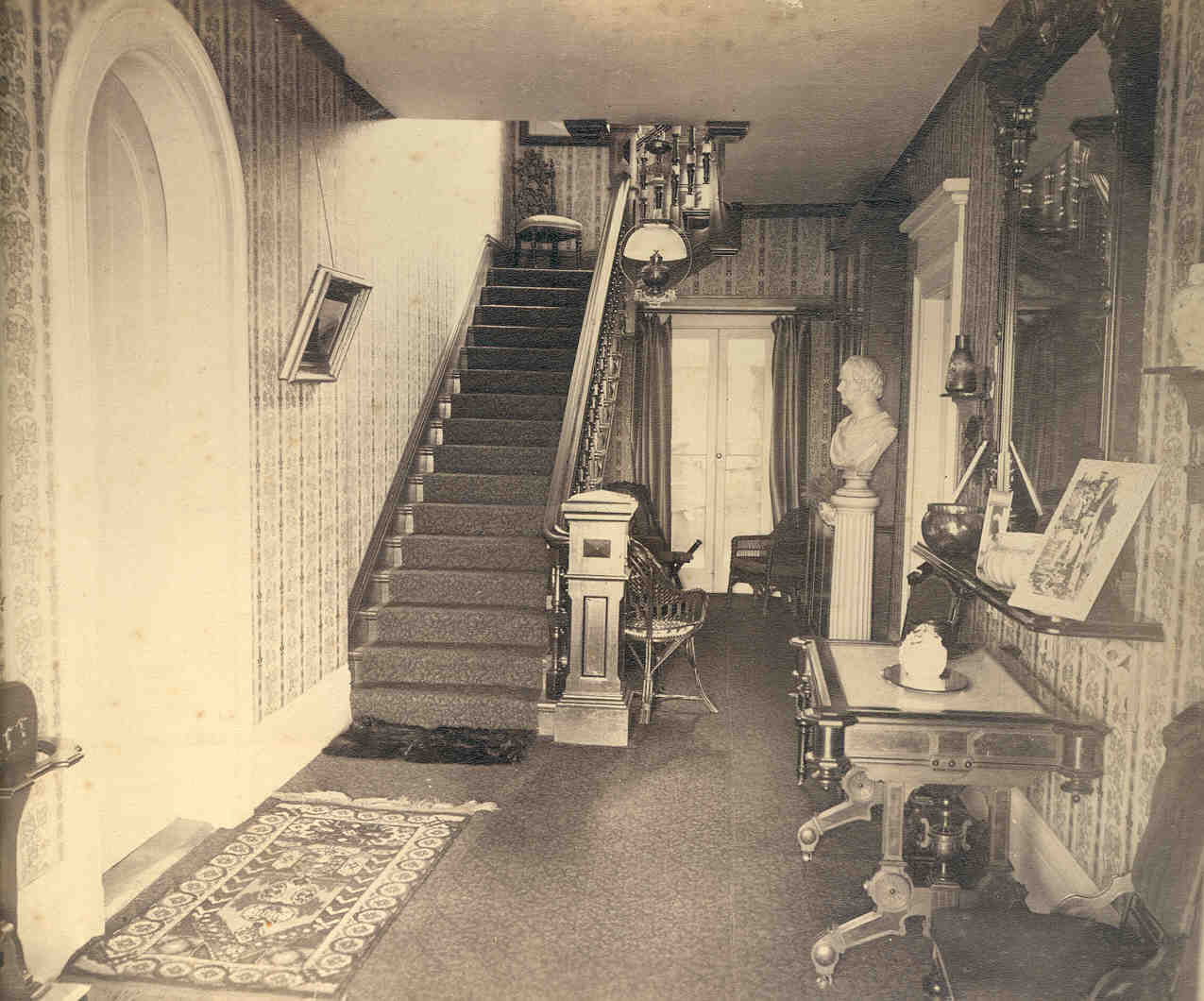 Many appreciative words have kept my father’s memory green, coming from many sources, and gratefully received by his own, from north, south, east and west, and countries even beyond the sea.

There would seem little more to say, were it not that nothing has ever been given to the public of his characteristics, as expressed in his home life.

My father was wholly domestic in his taste. He required no separate study, no family tip-toeing by a sacred door, or the turning of night into day in order to accomplish any literary work upon which he might be engaged. The very center of the family life was his chosen workshop, and newspaper and magazine articles, and some of his most carefully constructed lectures, were written with the whole large family of children around him. Among my earliest recollections is the long table ready for the evening of study. Mother (with the inevitable work-basket) was there, too, for father’s first question upon entering the house was always for her. I remember hearing halting translations of Virgil helped through by fatherly bridging of gaps, ending with the characteristic, "Yes, well,–" that his pupils yet remember. At that time, being, then, the petted youngest, it was my delight to comb and arrange his hair with a doll’s comb and brush, a process always extremely soothing to his tired nerves. The audacity of parting his hair in the middle, making beaucatchers at the sides, and even decorating the dignified head with a bonnet, was kindly tolerated by the father whose lightest word of authority I never dreamed of questioning. There were marvels in those days! Sometimes the tiny comb drew from the thick locks the little old-time silver three cent piece, which great event was hailed with shrieks of childish delight at the absolute blankness of comprehension on his part, that he could be suspected of any complicity with such a miracle.

We feared our father–but were not afraid of him. There was enough of the Puritan in our early training to make obedience not so much exacted as expected, and the father’s rarely expressed commands were most faithfully respected and executed by the mother. We felt his power, for it meant the best things of which we knew; and there was ever the touch of mercy upon justice. If, for instance, there was a complete surrender to uncontrollable mirth among the childish ranks drawn up in the solemnity of family prayers, at the comet-like apparition streaming through the rooms of the long-suffering cat, hotly pursued by the most mischievous of puppies, the offence received no comment; he allowed the breach of decorum to act as its own punishment. Or, if childish fun grew too uproarious, whilst he was writing in our midst, his murmured repetition of the word his pen was following, would often be the only sign that he was being disturbed. But if an altercation arose, and especially if any word of detraction was spoken, the absent-mindedness vanished, and the never-failing rebuke, “Let me hear no more like that,” was sure to hush us into silent abasement.

Perhaps nothing could give the keynote of his influence in the home so much as this resolute determination never to allow petty criticisms, detractions or envious remarks to pass unchecked. His was the most magnanimous nature I have ever known. If, however, he became convinced of the unworthiness of a character under discussion, he was sternly capable of condemning wrong doing, although even then we children were never allowed to roll the faults of others “like sweet morsels under the tongue.” He had a deep though often silent contempt for all littleness of the soul, and I never heard him say one envious or pessimistic word through all his hard and harassed years. The good fortune of others was always met by the warmest spirit of congratulation, and he had the rare gift of intuitively finding out the finest qualities in people and then gladly revealing them to others. The word “noble” has become forever ennobled to my thought by his generous applications of it to people.

His moral courage was magnificent. If circumstances failed him the next thing was taken up with a fine strength of bearing, the remembrance of which will forever remain as “part of my life’s unalterable good.” I so well remember the sweet curves of those strong lips and the steady light in the responsive eyes when he would rise from some disappointing experience or anxiety and seek some kind of action–not his preference–but the nearest seen duty.

We knew, though never directly from him, that there was always a great hunger in his life which a nearness to great libraries and more frequent contact with men of learning would have satisfied; for while kindness itself to an inferior and cordially appreciative of his equals, he passionately loved whoever was regarded by him as his superior.

There was positive elation in his manner when receiving a visit from an old college class-mate, or from a professor in some branch in which he was interested (and let those who knew him best state if there was any subject worth knowing about in which he was not interested), or when by chance a foreign traveler was interviewed, to whom he often gave as much by the suggestions contained in his questions, as was received.

A new study was always an epoch. I can see him pacing the long walk under his trees, book in hand, sometimes catching me as I sped by, and stopping to impart something of his keen enjoyment to even the limited comprehension of a child. I learned much from him that did not cost actual study, although he was quite capable of keeping me for days upon the first few lines of Virgil, causing me to feel for the rest of my life the most profound respect for the degree of absolute accuracy expected from the student of the classics. A walk or drive with him meant a lesson in botany, or geology, or mineralogy. The stone in the wall, the lichen on the stone, the boulder on the hill-side, the trend of the mountain chain, the glacier’s path, the old river bed–all told him volumes, which he retold to the child at his side; and many grateful souls will bear witness to the beginning of a new life of thought and reverent interest in this world of ours from the touch of inspiration given them through his magnetic dealings with these subjects as they “talked by the wayside.”

He gave us children a haunting sense of the value of time and opportunity, and the absolute obligation we were under as to self-improvement and the acquisition of knowledge. Poverty of means we were early taught to face with dignity and self-respect, but that poverty of mind, through neglected opportunities, was a disgrace. The question was never raised at our home, “What is a man worth?” but invariably, “What are his principles, and his standard of education?” During the later years we often heard him repeating the poem, “My mind to me a kingdom is,” with reverent earnestness. He was always learning, always enriching his “kingdom.”

When the shadow of fatal illness fell, he rallied himself with the last effort of that heroic will, to battle against the encroachments of disease upon his mental strength, by testing himself with daily readings from Homer in the original and in writing short articles for publication. Ere long, however, the self-imposed task was quietly abandoned, and who can tell the inner struggle with which he laid it down! After this, there arises before me the pathetic picture of his figure in the wheelchair, his little, worn pocket Bible in his hand, as he comforted himself, in his helplessness, with words that had been the sources of his manhood’s strength, and often in the twilight softly sang, “Gently lead, o gently lead us.”

Then the shadows deepened into the darkness that obscured his powers of expression, and months of heavy mourning lay upon us, not to be lifted till the morning of his emancipation dawned when, through tears, we could rejoice in the glorious freedom of a soul like his, “born to soar,” mounting “from form to form,” up through the boundless, limitless Universe.