by William B. Lapham 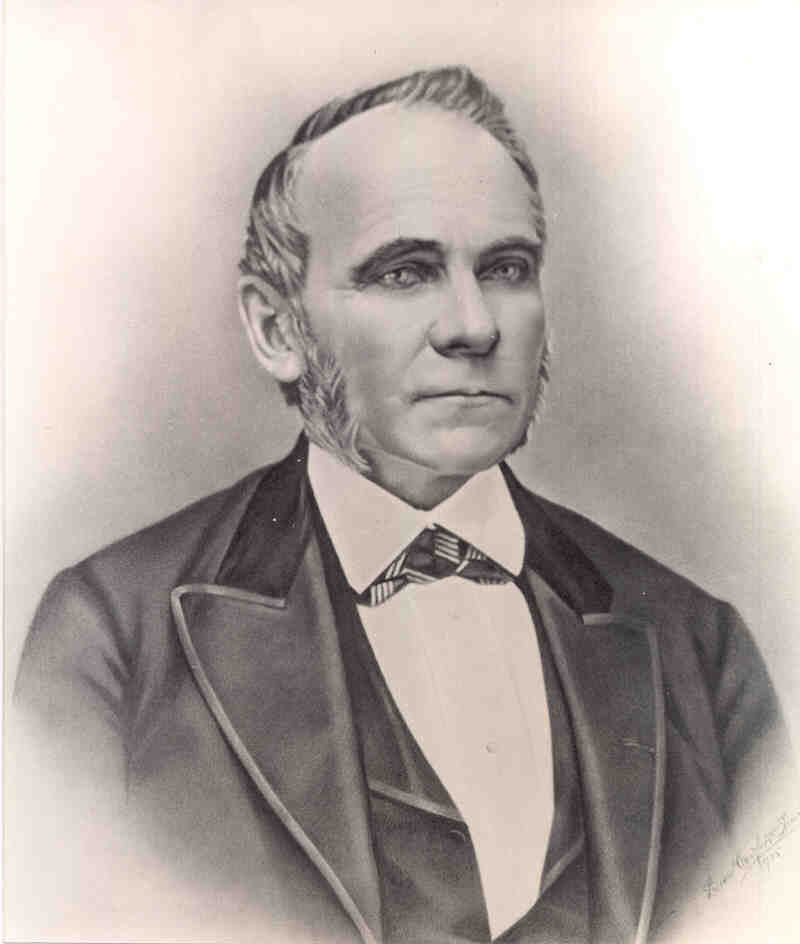 Editor’s Note: This sketch of Dr. True was read by Dr. Lapham before the Maine Historical Society, 17 March 1892.

Dr. Nathaniel Tuckerman True was born in that part of old North Yarmouth, which is now part of the town of Pownal, March 15, 1812. He was a lineal descendant of the Henry True, who was at Salem, Mass. in 1644; [he] married a daughter of John Pike and settled at Salisbury. Dr. True’s ancestors include some of the most distinguished Puritan families in New England, such as Wheelwright, Pike, Bradbury and Stevens. His great grandfather, Jonathan True, was one of the early settlers in North Yarmouth, and the second settler in that part of the old town which was first set off as Freeport and subsequently as Pownal. The grandfather of Dr. True, also Jonathan, was born in North Yarmouth, April 30, 1758, and left nine children, one of whom John True, born August 7, 1785, married November 30, 1810, Mary, daughter of Abijah Hatch. These latter were the parents of the subject of this notice. The Trues of North Yarmouth were substantial citizens, noted for strength of mind and character, noted also for industry and worldly thrift. Dr. True was inured to labor upon his father’s farm in Pownal, attending the brief terms of the town school, which were all the educational facilities the town afforded. He early developed a love for books, and while at home with his father, all his spare funds were devoted to the increase of his library, and much of his spare time to the study of his literary treasures. He was also a close student of nature, and every natural object, whether animate or inanimate, had in him a close observer and intelligent investigator.

Not until he was twenty years of age, did Dr. True decide upon pursing a collegiate course of study. He then became a student of Dr. Joseph Sherman, then principal of North Yarmouth Academy, and in two years entered the freshman class at Bowdoin College. Pecuniary reasons, and the fact that he was becoming of that age when it was important for him to enter upon a profession, induced him to leave college at the end of two years. This in after years was a source of great regret, and was, without doubt, the great mistake of his life. [He decided] upon the medical profession, not because he thought it most congenial to his tastes, but because it would better enable him to pursue the collateral studies of botany, chemistry, mineralogy, geology and natural history, of all which he was passionately fond, than any of the learned professions. While pursuing his medical studies, he engaged more or less in teaching, in order to provide himself with means, and met with marked success.

In 1835, he opened a high school at Bethel Hill, and was there two terms in each year, until he received his degree of doctor of medicine from the Maine Medical School in 1840, when he practiced for a short time in Durham. But he soon found the practice of medicine to be widely different from its study, and that while he had a fondness for the one, he had neither the taste nor aptitude for the other. So after two or three years in general practice of a profession in which he soon found he lacked the essential elements of success, he laid aside his drugs and his instruments, and adopted teaching as his life pursuit. Gould’s Academy situated at Bethel Hill, where he had successfully taught a number of terms of high school, was established and put in operation, while Dr. True was engaged in the study of medicine and in practice, and when he decided to abandon the medical profession, he engaged with the trustees of Monmouth Academy to take charge of that institution, and remained in charge, meeting with marked success for several years. But the trustees of Gould’s Academy and the people of Bethel Hill kept in remembrance the success that Dr. True [had] as a high school teacher, and as soon as an opportunity was afforded they invited him to take charge of their academy—a position which he readily accepted, for he had become greatly attached to the people and the place. It was in 1847 that Dr. True returned to Bethel, intending to make the place his future home. The academy enjoyed its greatest success in the years immediately following the return of Dr. True. The building was literally packed with pupils during the spring and fall terms, while many pursued their studies at their rooms, and only came into the academy long enough to recite.

Dr. True remained in charge of Gould’s Academy until the trustees decided that new methods should be introduced and an infusion of younger blood, to put them into operation. After this, he opened the Highland School for boys which continued for four years, and then, while his family continued to reside at Bethel, Dr. True had a professorship in a normal school in western New York, and also taught terms of school at Gorham and Milan in New Hampshire. He was the editor of The Bethel Courier, the only newspaper ever published in Bethel, for about two years, and it was in the columns of this paper that appeared his chapters on the early history of Bethel. He served on the school board of Bethel for several years, and one year as supervisor of schools for Oxford County. At the death of Dr. Ezekiel Holmes in 1865, Dr. True was invited to take charge of the agricultural department of that paper, which he accepted and successfully filled for four years. He was also an efficient member of the Maine Board of Agriculture. He wrote much upon the subject of agriculture and horticulture, and was the founder of, and the leading spirit, in the Bethel Farmer’s Club. He was a constant contributor to the columns of the Oxford Democrat, Portland Transcript and Lewiston Journal, and wrote upon a great variety of topics.

Dr. True instructed his students at Bethel not only in theory but in practice, and it was his delight to take his spring and summer classes in botany through the fields, pastures and woods, gathering and classifying the various wild flowers in their season, or his pupils interested in mineralogy and geology to the summit of Paradise Hill, and sometimes even to the tops of surrounding mountains, where he pointed out and described diluvial markings and other signs of glacial action, and gathered minerals of various kinds. His influence was felt throughout the town and county, and was elevating in its effects more especially upon the public schools.

Dr. True’s studies embraced a very wide range, and he was able to impart instruction in almost every department of useful knowledge. They embraced languages, both ancient, including Latin, Greek and Hebrew, and modern including French, Spanish, Italian and German, the natural sciences, practical surveying and engineering, scientific agriculture, navigation, astronomy, and the higher mathematics. If he failed in anything, it was in his effort to cover too much ground, so to speak, for no man can hope to be proficient in everything, and the usual result where a person tries to be proficient in everything is that he will be profound in nothing. Dr. True was interested in historical and antiquarian research which induced him to seek membership in the Maine Historical Society. Though not a resident of Bethel until his mature manhood, he soon became and continued to be until his death, the historical man of the town. At the time of the centennial celebration, he was selected as the historian of the occasion, and later at the centennial of the Indian raid into Bethel, he was called upon to act in the same capacity.

Dr. True was a ready and fluent speaker, and when instructing his classes or lecturing before larger audiences upon geology and kindred subjects, he always addressed his hearers in a familiar and off-hand manner, making himself easily understood. He was [an] authority upon the botany, mineralogy and geology of northern Oxford County, and also upon the history, language and customs of the Abenaki Indians. He was enthusiastic in the schoolroom, and had the happy faculty of inspiring his pupils with the same spirit. Among his pupils were the ablest men and women that ever went from Bethel, and not a few of them have achieved national reputations. His school was well-patronized by the people of Portland, and several of the members of this Society, who have been under the instruction of Dr. True, can testify to his efficiency as a teacher. His last active work in 1883 was a resumption of his old employment at Litchfield Academy. There he was stricken with paralysis from which he never recovered, and returning to Bethel, he lingered for a year and more, gradually becoming more feeble in mind and body until he passed away. [He died May 24, 1887.] Dr. True received the honorary degree of master of arts from Waterville College [now Colby] in 1841, and the same from Bowdoin in 1868. He had been president of the Maine Board of Education, corresponding member of the Portland Society of Natural History, of the American Association for the Advancement of Science, and of the Wisconsin Historical Society. Save his magazine and newspaper articles, none of the writings of Dr. True were ever published. He left more or less manuscript, but none of it in form to be printed. His papers upon the language of the Abenaki Indians were disposed of by the family for a small sum and carried to Massachusetts. Dr. True was a professor of religion, and the time of his death, one of the deacons of the first Congregational church in Bethel.

Dr. True was married August 9, 1836, to Ruth Ann, daughter of Aaron and Rebecca (Marston) Winslow of Westbrook. By this marriage, he had five children, three of whom died young. The surviving daughter, Mary Hatch True, has achieved a wide reputation as a teacher of deaf mutes.

For [his] second wife, Dr. True married September 19, 1849, Susanna Webber, daughter of Eben and Mary (Barnard) Stevens of Sweden, Maine. By this marriage, there are two daughters and one son, all of whom with their mother survive. The son, John Preston True, a young man of great promise, fills an important position in the publishing house of Houghton, Mifflin and Company of Boston.