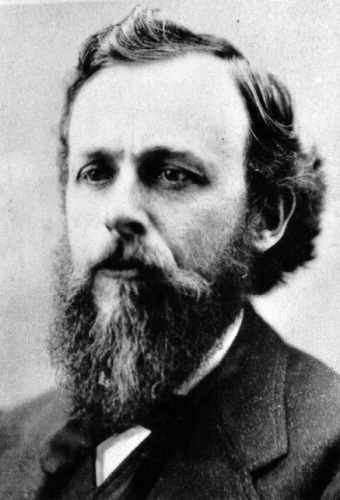 Few connected with Bethel's Gould Academy are aware that one of the leading figures in the fields of zoology and Japanese culture in the 19th century attended that venerable institution in the days of its founder, Dr. Nathaniel Tuckerman True (1812-1887). Edward Sylvester Morse was born in Portland, Maine, 18 June 1838, the son of Deacon Jonathan Kimball Morse and Jane Seymour Beckett. His father was a staunch Calvinist Congregational Christian, and his mother, who did not share her husband's religious beliefs, was known for her interest in the sciences.

Much to his father's displeasure, young "Ned" Morse was expelled from every school he attended in his youth—the Portland village school, the academy at Conway, NH, in 1851, and Bridgton Academy in 1854. His young, always restless and curious mind could not accept the confines of the standard classroom, for he was easily distracted from his studies. As a boy, Morse was drawn to collecting shells. When he was seventeen, he joined the Portland Society of Natural History, where he found encouragement of other naturalists. He also began to correspond with other leading American conchologists.

Sometime prior to 1854, Morse made the acquaintance of another Portlander, John Mead Gould (1839-1930), who would be his lifelong friend. They attended Bridgton Academy in the summer of 1854 and explored the Maine woods in their spare time. In the fall of that year, Morse was severely punished by the schoolmaster and expelled for carving on the wooden desks.

At the age of sixteen, Morse's elder brother, Fred, obtained employment for him as a draftsman for the Portland Company, which made steam engines for trains and ships, a subject far removed from what would become his obsession—zoology—but nonetheless it developed Morse's talent for making detailed drawings. In fact, Morse became so adept at his drawing that he could make different sketches with each hand or write Greek and Latin simultaneously.

"Ned" Morse's academic salvation came with his arrival in Bethel at Gould Academy, where he came under the remarkable influence of Dr. Nathaniel Tuckerman True, who immediately recognized the brilliance of this new student. The Doctor had long been an advocate of encouraging learning outside the usual classroom experience. In fact, he often took students to the outdoors, roaming around the area studying glacial formations and observing the local flora and fauna. Dr. True and "Ned" soon formed a strong academic bond, the Doctor giving this sometimes wayward youth much latitude in roaming about the Bethel area hills and Androscoggin river valley in search of specimens for his natural history collection. True also was instrumental in bringing to Morse's acquaintance Charles J. Sprague and Thomas Bouvè of the Boston Society of Natural History, who were known to have journeyed to Bethel to accompany the Doctor and Morse on some of their expeditions in the countryside.

On 28 September 1856, Morse discovered a minute snail in Bethel. This discovery launched him on the road to a career as a naturalist. In 1859, the Boston Society of Natural History proclaimed Morse’s snail Tympanis morsei. For a precocious twenty year old, this designation must have been a tremendous boost to his self-esteem.

Dr. True’s influence saved young “Ned” Morse from a life that had previously been anything but successful. From Gould, on 27 May 1859, Morse journeyed to Cambridge, MA, to meet the famed Louis Agassiz, who occupied the chair of zoology and geology at the Lawrence Scientific School of Harvard University. Under Agassiz’s direction, Morse studied marine biology, specializing in chonchology. At this time, Agassiz was perhaps the foremost zoologist in the nation; Morse could not have found a more suitable mentor. For the next generation or so, those on the list of Agassiz’s associates and students became among the leading natural scientists of the era.

During the Civil War, Morse attempted to enlist in Company A of the 25th Maine Infantry Regiment, but was turned down due to a chronic tonsil infection. Throughout the war, however, he was in regular correspondence with John Mead Gould, who sent his diaries back to Morse from the front to become, after the war, a major Civil War source (Gould's diaries were published in 1998).

In 1866, Morse settled in Salem, Massachusetts, where he spent most of his long life. He became engaged in a study of Atlantic seaboard brachiopods, which would attract international attention. Two years later, Morse constructed the house at 12 Linden Street in Salem that would be his home for the remainder of his life. 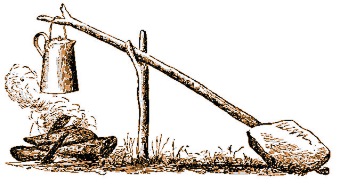 A drawing by Edward Sylvester Morse for John Mead Gould's book, How to Camp Out, published in 1877

During this period, he helped establish the American Naturalist magazine of which he became one of its editors and included a large number of his drawings. His work began to be recognized by a number of professional organizations and prestigious institutions. In 1868, he became a fellow of the American Academy of Arts and Sciences. The following year, he was selected as the vice-president of the American Association for the Advancement of Science and was elevated to the presidency of this organization in 1886. From 1871 to 1874, he occupied the chair of comparative anatomy and zoology at Bowdoin College. In 1874, he was appointed a lecturer at Harvard University. Two years later, he was named a fellow of the National Academy of Science.

In 1877, Morse departed for Japan in search of new specimens and was soon offered a professorial position at Tokyo Imperial University, which he held until 1879. It was at this time that Morse began to collect Japanese pottery, assembling what would become in the United States the finest collection of the era. In 1890, this collection was purchased by the Boston Museum of Fine Arts. Morse kept a portion of his collection which eventually became the Morse Collection at the Peabody Essex Museum in Salem.

Morse published his First Book of Zoology in 1875. This was followed in 1888 with Japanese Homes and Their Surroundings. The latter work is of particular interest to historians as he was one of the few westerners to live in 19th century Japan.

Touring Europe in 1887 and 1888, Morse landed at Liverpool and went on to visit England, France, Germany, Austria and Switzerland.

Morse’s association with Japan would be long remembered on both sides of the Pacific Ocean. In 1898, Morse was decorated with the Order of the Rising Sun, Third Class, by the Japanese Emperor, making him the first American to be so honored. Toward the end of his life in 1922, Morse was again honored in Japan with the Order of the Sacred Treasure, Second Class.

In 1880, Morse returned to Salem. The following year, he assumed his life’s work as director of the prestigious Peabody Academy of Science (now known as the Peabody Essex Museum). During his years here, the museum acquired its world famous collection of Oriental art in addition to its extensive nautical holdings. In this position, Morse became a major national figure, which was recognized by his election in 1911 to the presidency of the American Association of Museums.

The astronomer Percival Lowell inspired his friend Morse to become interested in the planet Mars. Morse would occasionally journey to the Lowell Observatory in Flagstaff, Arizona, during optimal viewing times to observe the planet. In 1906, Morse published his Mars and Its Mystery in defense of Lowell’s speculations regarding life on that planet. This work was the only one he produced concerning a subject in which he was not an expert, but it must have made some impact since Morse was admitted to the French Astronomical Society.

Morse’s wife Nellie died in 1911. In his later years, he was assisted by the Brooks sisters—Josephine as his housekeeper and Margarette as his administrative assistant.

In 1914, when fire consumed most of Salem, Massachusetts, Morse’s house was among the properties spared. Two of his scientific associates rushed to assist him in saving his significant scientific collection, but were surprised to find him sitting in his study learning to play a South Sea Island flute.

Two more publications came from his pen: Glimpses of China and Chinese Homes (1902) and his last book, Japan Day by Day (1917).

On 18 June 1925, Morse received a scarlet cap from Dr. Chiomatsu Isahikawa, a former student in 1877, who had succeeded him as professor of zoology at the Imperial University. This cap was part of a tradition that Japanese men of distinction receive on their eighty-eighth birthday in recognition of their long life and achievements. The cap was indeed an honor, but it came just six months before Morse died in Salem at age 87. His funeral was held at the First Unitarian Church in Salem with burial in the nearby Harmony Grove Cemetery.

Ever the scientist, Morse had bequeathed his brain to the Wistar Institute in Philadelphia with the expectation that some anatomical factor of his ambidexterity might be discerned during an autopsy. Morse wrote his old comrade John Mead Gould reporting that the Institute had commissioned a special jar with his name upon it for storage of his brain when the time came.

Upon hearing of the passing of his lifelong confidante, John Mead Gould wrote, “What is the world and life here if no Ed Morse?” It is doubtful that Morse would have achieved what he did without the timely appearance of Dr. True and his connections in his young life. Certainly Dr. True’s efforts on his behalf were significant in launching Morse’s scientific career. Without them, it is difficult to speculate just what would have happened to him. True did make a difference in this case. His work in a small, struggling school in western Maine bore fruit as it did in others fortunate to come under his remarkable influence. True did not live long enough to see the full flowering of his brilliant student, but undoubtedly by the time of his death in 1887, there was little doubt that Morse had become one of the leading scientists of his era.