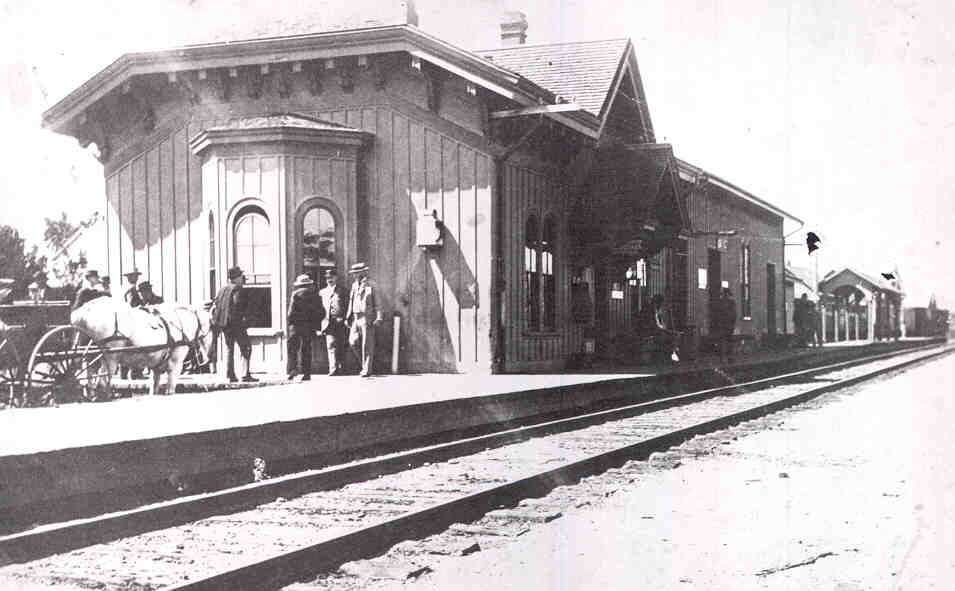 Editor’s Note: The following is an edited version of remarks made by Society Curator of Collections Randall Bennett on 10 March 2001 at festivities commemorating the 150th anniversary of the arrival of railroad service to Bethel.

Welcome, as we celebrate the sesquicentennial of the arrival of regular train service to Bethel. This event is the first in a series of programs and exhibitions sponsored by the Bethel Historical Society honoring the construction and completion (in 1853) of the first international railroad in North America—now the St. Lawrence and Atlantic. We wish to thank George and Danna Nickerson for hosting this celebration in their historic "Potato John" Swan barn, the only remaining nineteenth century building in Bethel with a direct association with the railroad.

John Swan (1829-1907) lived in the large house across the street and built this storage barn about 1880 (the 1880 Bethel map on display shows this building, the railroad station, and a freight shed on this side of Railroad Street). Swan took advantage of the railroad's presence and the local production of potatoes, purchasing thousands of bushels and storing them in this building until they could be shipped out—mostly to the Boston market. The Oxford Democrat newspaper reported that in October 1878, for example, he shipped out twenty carloads of potatoes, and between September 1879 and March of 1880, he sent some fifty-six loads from the Bethel station; by 1883, 40,000 bushels from Swan's barn made their way to the Boston and western markets. The reporter added that it was more profitable for local farmers to raise potatoes than corn or beets. The Democrat also recorded that Swan paid farmers between 35 and 40 cents a bushel, and sold them in Boston for 75 cents a bushel.

This week's Bethel Citizen did a good job of summarizing the history of this railroad line, and our exhibit opening in July will also provide an overview of the line's past, so I won't take time to go into detail, but I should mention that the line was begun in 1846 and opened between Portland, Maine, and Montreal, Quebec, in 1853. Its course lay across one province and three states, in two countries, and its construction required four charters. Most importantly, it provided Montreal with an ice-free port, and allowed goods (such as potatoes) to be shipped easily from communities along the line. One easy way to grasp the railroad's effect on the economy of this region is to imagine the twelve-story grain elevators on the waterfront in Portland, and the Alpine House at Gorham and Glen House at Pinkham Notch (the first of the "grand hotels" in the White Mountains), all of which were built due to the railroad's coming.

In his remarks delivered to a Bethel Historical Society meeting in 1983, Grand Trunk Railway historian John Davis described the first engine to visit Bethel before regular service began on 10 March 1851. Named the Jenny Lind, in honor of the famous Swedish nightingale, the engine headed north on 5 March 1851, pulling a construction train that included a turntable and accessories that would be installed here in Bethel. Davis stated at that time, "It also carried many a youngster invited aboard the flatcars at various stops along the way. At Locke Mills, Lemuel Dunham was among those climbing aboard. He recorded that the track was new, ungraded and quite rough, [and] the train did not run at a very high speed, [but that] exposure to the winter cold riding on a open flatcar mattered not, for the occasion was worth risking pneumonia." Davis continued, "The platform here at Bethel Hill was thronged by eager spectators, all determined to get a good look at this huge 'elephant.' The engineer sat in the cab, saying nothing to anyone, until the Jenny Lind was closely surrounded by the crowd, and then suddenly the whistle blew, causing a 'first-class' reaction, especially among the ladies."

On 6 March 1851, the day after the arrival of the first engine in Bethel, the Oxford Democrat printed an advertisment announcing the Atlantic & St. Lawrence Railroad's schedule for trains to Bethel beginning on March 10. The ad stated, "(1) Passenger trains will run daily, Sunday excepted, until further notice, as follows: Leave Portland for Bethel at 7:30 A.M.; leave Bethel for Portland at 1 P.M. (2) Freight trains will run between Portland and Bethel on Mondays, Wednesdays and Fridays. No goods received after sunset. (3) The Company will not be responsible for baggage to an amount exceeding $50 in value, unless notice is given and paid for at the rate of one passenger for every $500 additional value. [The passenger rate was then $2 from Portland to Bethel.] (4) On the arrival of the 7:30 A.M. upward train from Portland, stages will leave the following stations: (a) South Paris station—stages leave on Tuesdays, Thursdays, and Saturdays for Harrison, Bridgton, Waterford, Lovell, and Fryeburg. (b) Bryant's Pond station—stages leave on Mondays, Wednesdays, and Fridays for Rumford and Andover. (c) Bethel station—daily stages leave for Gilead, Shelburne, NH, and Gorham, NH; Tuesday, Thursdays, and Saturdays for Randolph, Jefferson, and Lancaster, NH; Monday, Wednesdays, and Fridays for Berlin, Milan, and Northumberland, NH."

From Jeff Holt's book, The Grand Trunk in New England, we learn that the "special" departed from Portland at 7:30 A.M. with the engine Montreal with the directors of the railway, Superintendent S. T. Corser, and many prominent Portlanders on board. The train arrived at 11:05 A.M. at Bethel. Its average speed was twenty miles per hour. After several speeches and an inspection of the construction progress, the train left for Portland at 1 P.M.

In Eva Bean's East Bethel Road, we find the following discussion of the railroad's arrival: "There was a great celebration in Bethel. As the train rounded the bend below the village, Robert Chapman, Bethel storekeeper and master of the day's program [and at the time the owner of the Society's Robinson House] yelled 'Touch her off Phin!' Phineas Frost must have been nervous with the cannon. It just went 'Phoosh!' to the everlasting disgust of the late Augustus M. Carter. He was a boy of ten at the time, but already versed in manipulations of that kind. To the last of his days he mourned that he could have touched off a deafening volley that would have done honor to the momentous occasion."

John Davis reminds us that the first freight train into the village arrived in the afternoon of 10 March 1851at 2 P.M., but Bethel's reign as an early terminus was short-lived, for in June 1851, the turntable facilities were moved to West Bethel, and eventually further up the line to Gorham, New Hampshire, by the middle of July, when regular passenger rail service was opened to that important White Mountain town.