This article has been edited and updated by the author for inclusion on this website. 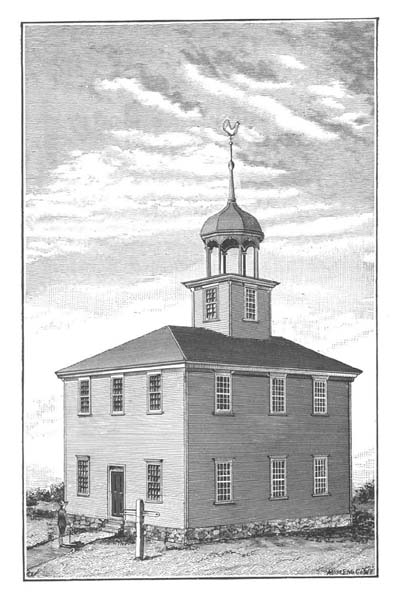 Portland's Cumberland County Courthouse of 1785, which served as the model for Bethel's first meetinghouse, built in 1807
From Portland in the Past (1886)

Thanks to the research and writing efforts of Leonard Bond Chapman (1834-1915), a Deering (now Portland), Maine, historian, and descendant of several early Bethel families, we now have the first detailed picture of Bethel's first meetinghouse, a wooden structure that stood near the south (Bridge Street) end of the present Androscoggin River bridge from 1807 to 1848. Chapman fortunately recorded numerous details about Bethel's (and Oxford County's) past in a series of articles entitled "Fragments of Local History," which appeared in The Oxford County Citizen between 1909 and 1914.

Mentioned briefly in Dr. Nathaniel T. True's "History of Bethel" newspaper column, which appeared from 1859 to 1861 in the town's first newspaper, The Bethel Courier, and again in Dr. William B. Lapham's History of Bethel (1891; reprinted 1981), this meetinghouse is of major importance to an understanding of Bethel's architectural history, as well as its early social and religious development. Besides being a significant structure in northern Oxford County, the meetinghouse was an interesting "holdover" from much earlier, eighteenth century meetinghouse and church types used in Maine, Massachusetts, and New Hampshire. In addition to furnishing a written account of this historic structure, Chapman made note of the Portland, Maine, building that served as the model for the Bethel meetinghouse: the Cumberland County Courthouse (1785-1816), illustrated opposite page 499 in the work Portland in the Past (1886), by William Goold [see above]. The Bethel Historical Society has a copy of this book in its library holdings, and the view published herein appears for the first time in its western Maine context.

Constructed when Bethel's population was scattered throughout the town, with minor building clusters near what is now Mill Hill, as well as the common at Middle Intervale, the first "West Parish Congregational Meetinghouse" was built under the supervision of Major Amos Hills, an early settler, justice of the peace and "house carpenter" who once resided just west of the present Dooen (formerly "Bethel Inn") Farm off Route 2. Chapman, in his Citizen articles, supports the brief account about the meetinghouse contributed by Dr. Nathaniel Tuckerman True to the Report of the Centennial Celebration at Bethel, August 26, 1874—one which describes the building as nearly square, hip-roofed and surmounted by a cupola with a tall pole and wooden rooster. The early twentieth century Citizen articles, however, include information about the meetinghouse that goes far beyond the meager accounts of the previous century.

The locating of the meetinghouse—a much-discussed issue since October 1798 when the legal voters in the West Parish (formed, along with an "East Parish," in 1796) assembled "to determine upon a place to set a meetinghouse"—was finally resolved in September 1806. At that time, land for "a Common on which to erect a meetinghouse" was purchased from John Stearns, whose farm ran along the south bank of the Androscoggin from present-day Bridge Street/Mayville Road to Mill Brook.

Based on contemporary written records, as well as the memories of those Bethel residents who could still recall this "ancient Congregational meetinghouse," Chapman wrote a detailed account of its physical appearance in July 1909, which, through lack of criticism in later editions of the newspaper, may be considered highly accurate (the only exception taken—noted in Chapman's column of November 3, 1910—was that the Bethel building had more windows than the Courthouse shown in the Portland in the Past view). Quoting from a letter written on January 12, 1807, by Amos Hills to relatives in Newbury, Massachusetts, Chapman wrote, "We are about building a meeting house in our parish next summer. I have agreed with another man to frame and finish the outside. It is to be 40 x 60 feet, with a singing loft across one end." Continuing on the subject based on information gathered from other sources, Chapman stated:

The building was fashioned after the Cumberland County Court House that stood where the Portland City Hall ruins are now seen, corner of Congress and Myrtle streets. . . . It was two story, hip-roof, belfry and liberty-pole which was surmounted by a wooden rooster—symbolical of something that has not been explained in print—more indicative in the use by a court of justice perhaps than a church society. The first floor was an open hall where the whipping post and gallows were exposed to view when not in use, the second was used for a court assembly and office rooms, necessitating two rows of windows around the entire structure . . . Such in brief is the history of the building of which the old Bethel West Parish meetinghouse was a facsimile . . .

From an outside view the double row of windows in the Bethel building indicated a gallery all the way around, but the front end only contained one which was over the entry, the pulpit being in the opposite end. The pews were of the box pattern, paneled all around with entrance doors made to fasten upon the inside. The seats were in two parts and constructed so as to turn up if required when occupants stood. As large families were the rule then, all the available space in a pew was utilized, so a short seat was constructed at one side of the door and at the opposite end another. Occupants of the short seats would sit facing each other, and when seating themselves after standing, the noise of the dropping of the seats partook somewhat of a fusillade of India crackers in the hands of the boys, July 4th. The outside of the structure was painted yellow at the time of erection but the inside ever remained in its natural color.

Though Chapman returned to the subject of the meetinghouse only infrequently in future issues of the Citizen, a reading of many of these columns helps to place the building's construction in context with the long-standing rivalry between Bethel residents who lived at Bethel Hill (nearest the Common) and in the "Valley" (near present-day Bridge Street/Mayville Road and the Mayville neighborhood north of the Androscoggin River). According to Chapman, as early as March of 1842 there were serious discussions of the old meetinghouse's replacement, as well as of dividing the parish—those on the north side of the Androscoggin having to cross by ferry or by fording in the summer, and on the frozen river in the winter, to attend church services. Only a few years later, the West Parish society did indeed separate into two groups, those on or near the "Hill" constructing the present West Parish Congregational Church in 1847, and those in Mayville their own church edifice, which was dedicated in December 1849. Of this latter structure, the "Second Congregational Church of Bethel," Leonard Bond Chapman wrote:

The [church] stood a short distance from the northerly end of the bridge over the Androscoggin river, and some of the frame of the old meetinghouse was used in its construction. It was painted white and had a steeple . . . it was sold and during the month of May 1909, demolished, some of the timber going into an addition to the Novelty Works building [later the Hanover Dowel Company mill on Cross Street).

Of the first meetinghouse, which was taken down late in 1848 (and where the Reverend Daniel Gould, among others, preached), Chapman remarked, "Sunshine and shower had caused the yellow-colored paint to become unprotecting to the wear of the elements, and the color of the rooster perched high above all his immediate surroundings had become dim, but in other ways the building appeared to the very few who remember it good enough with a few repairs for unborn generations, but the will of the majority, after much discussion at diverse times, appeared by actual account of raised hands to be against its continuance." One of Chapman's informants, Algernon Sidney Chapman (1832-1917), not only provided memories of the old structure, but in all likelihood the important 1807 letter of Amos Hills, A. S. Chapman being his grandson. From the latter, Leonard Bond Chapman may also have gleaned the fact that Calvin Twitchell (an uncle to Samuel B. Twitchell who lived where the Prodigal Inn is now situated) had carved the wooden rooster weathervane by hand. (Some readers may recall the recent sale of the more famous "Portland Weathercock," which had once surmounted the old Cumberland County Courthouse, for an astounding six-figure price.) The weathervane was eventually purchased by American folk art collector Nina Fletcher Little and is on display at her former summer home (now a museum), Cogswell’s Grant, in Essex, Massachusetts.

The construction and evolution of Bethel's first meetinghouse, from a societal viewpoint, points to the significant position of the Congregational Church—the "orthodox religious society"—in early nineteenth century Maine. Architecturally speaking, it was not at all uncommon, in the days when professional architects were almost non-existent in Maine, to organize a committee which reviewed existing structures that might serve as models. This would explain the Portland-Bethel connection (for other local examples of this process, see the book Oxford County, Maine: A Guide to Its Historic Architecture). For the modern researcher, it is truly providential that so much information concerning this now-lost Bethel landmark has been preserved in the writings of the local historian Leonard Bond Chapman. 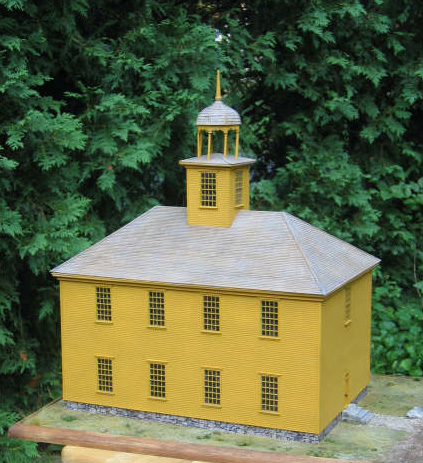