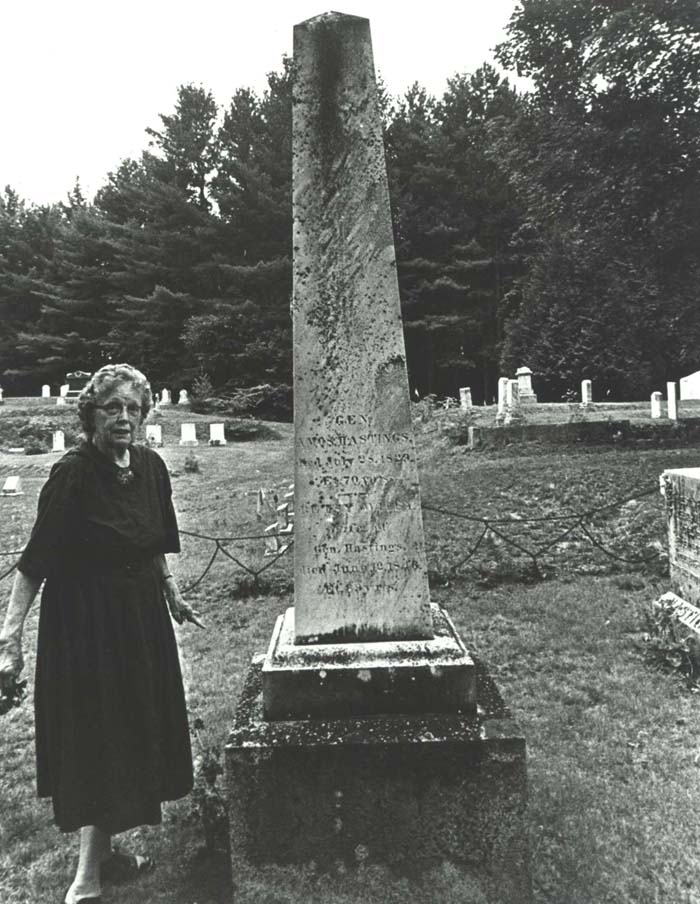 No one seems to know who first conceived of a Bethel Historical Society, but in 1855 thirty citizens gathered for what was recorded as an antiquarian supper with a desire to preserve the town's history. Various reminiscences were heard, all apparently faithfully recorded in the Oxford Democrat by Bethel's most prolific historian, Nathaniel Tuckerman True. Nothing toward the formation of an official organization was attempted, however, at this time or any other until relatively recently. The Bethel Library Association, founded in 1879, seems to have been the repository for many of the printed materials that passed from private hands and retained within the town. Not surprisingly, it was the Library Association, probably in response to the local history movement of the twentieth century and with the promise of a substantial gift of antiques, which explored in 1963 the possibility of a historical society or historical museum inside the library building. These plans never developed, however, but several of the library trustees plus other interested citizens were instrumental in founding the Bethel Historical Society at a meeting in the library on May 31, 1966.

From the beginning, the Society set definite goals: To raise money, to preserve and interpret the history of the area, and to secure a permanent home. Fund raising was chiefly limited to achieving a mile of pennies in yards (48 cents to a yard), but various other items (including buttons from an apple tree allegedly planted by Molly Ockett) were sold and a highly successful antique show was held the first summer of existence. Various papers were heard at meetings initially held in the library, but gradually moved to other locations. These included the late Ida Packard speaking on Bethel post offices, Dale Thurston's presentation on the development of dowel and wood turning operations in town, and Florence Thurston's discussion on Hanover's history. Several sites were discussed as possible future homes for the Society to house all the materials of Bethel's past that were collected, but until this goal was achieved these were stored in the attic of the Library building. A constitution was adopted the first year and a booklet, Molly Ockett, appeared in 1969.

The struggle to survive proved difficult. Membership grew steadily but at times meetings had to be canceled for lack of attendance. Funds were extremely limited, and, consequently, projects undertaken were of modest nature. Charles Heywood resigned in October 1968 as president and was succeeded by Dale Thurston. But through it all Eva Bean, with the help of several other dedicated members, managed to sustain the fledging Society's life.

With Eva Bean's death in October 1969, the Society lost its more devoted worker and her unparalleled knowledge of local affairs. But others stepped in to fill the void. Mrs. Christine Grover succeeded Miss Bean as Secretary and her husband, John T. Grover, became president in 1969 serving until 1972 when E. M. Quinn was elected to that position. The main development during these years was interesting Dr. Sidney Davidson, of the William Bingham II Trust for Charity in restoring what was then the Ada Durell house, originally built by Dr. Moses Mason in 1813, as a museum and headquarters for the Bethel Historical Society. Its fine Federal style, Dr. Mason's distinguished career, and the outstanding Rufus Porter style murals in the front hall made it an ideal choice.

A thorough and painstaking restoration took nearly two years with members of the society assisting in the process. In 1972 the Dr. Moses Mason House was designated a national historic place in the State of Maine, due largely to the work of Mrs. Elizabeth Mason Carter. Mrs. Carter was also instrumental in two other undertakings of the Society, Homecoming Days held in 1971 and 1972, which created great interest in the town and its past.

During this period of its history, the Society also adopted a new constitution and by-laws placing ultimate authority in a board of seven trustees responsible to the membership. Incorporation took place in 1971.

With the deed to the fully restored Dr. Moses Mason House awarded to the Society by the Bingham Trustees in February 1974, a new chapter in its history began. The museum had to be furnished and the facilities managed by a curator. An urgent call went out to the community for donations of furnishings appropriate to the times of Dr. Mason's life and the response was most gratifying. Over seventy individuals donated at least one item that could be used in the museum. Stanley Howe, a direct descendant of several of the town's founders and the holder of university degrees in American history, was selected as curator. By the time of the building's dedication on July 10, 1974, the museum was operating and the Society's affairs were being conducted from a central headquarters.

Margaret Joy Tibbetts, recently retired from the State Department, succeeded Barbara Merrill as president in the fall of 1973 and under her leadership the Society began to expand its programs and projects. A twenty-four page special edition of the Bethel Oxford County Citizen in commemoration of the Dr. Moses Mason House and the 200th anniversary of Bethel's settlement was published on the dedication day, July 10, 1974. A booklet, Dr. Moses Mason and His House, also appeared in the spring of that year. The creation of an exhibit of artifacts and photographs around the theme "The Family Farm," as part of the History Outreach Project of the Maine League of Historical Societies and Museums, as well as an accompanying pamphlet, marked the first annual Heritage Day in February 1975. The latter event included craft exhibits and demonstrations, historical films, and museum tours designed to encourage historical awareness and appreciation. A microfilm project was undertaken with a grant from the Maine Commission for the Arts and Humanities, and local history programs were developed for the schools of the area. Two craft courses and one in local history were offered for the first time in the fall of 1975.

In recognition of an "effective program of preservation, publication and education," the Society was awarded a Certificate of Commendation in October 1975 from the American Association for State and Local History. Another significant development was the construction of an archives room (with funds provided by the William Bingham II Trust for Charity), which was dedicated to Eva Bean on May 6 during the Society's Tenth Anniversary festivities.

Through the summer of 1976, the Society observed the nation's Bicentennial with a series of films and special presentations. A paper was read at the July monthly meeting detailing what is known of Bethel's Revolutionary War veterans. Also opening at this time was an exhibit, with an accompanying booklet, entitled "Made in Bethel," consisting of photographs and artifacts relating to manufacturing in the municipality from the earliest days to the present. During the town's official celebration of "An Old Fashioned Fourth," the Moses Mason House served as the central headquarters. Hundreds of people participated in a wide range of activities, from canoe races to scavenger hunts, and all culminating in the impressive fireworks display on the Bethel Inn Golf Course.

The Society also hosted the fifteenth annual meeting of the Maine League of Historical Societies and Museums on September 18. Well over one hundred members from Maine's historical societies and museums attended the affair held in the Moses Mason House meeting room, highlighted by a book fair in the Bethel Inn and the luncheon address of Society past president Margaret Joy Tibbetts.

The Society has indeed come a long way in the ten years since 18 interested citizens gathered in the public library. Many dedicated members and friends have worked hard and with the most generous support of the William Bingham II Trust for Charity, the aims of the Society to preserve and interpret the local past seem closer to realization. Much more remains to be done, and the Society anticipates even more ambitious programs and projects in the future.