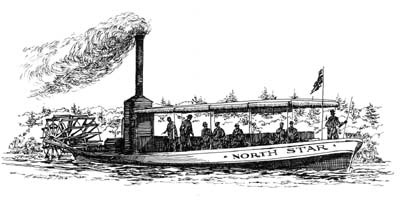 Nearly fifty feet long and capable of carrying fifty passengers, the "North Star," was launched from the Hanover ferry landing in March of 1889, and on its trial trip made it to the docking site at Alder River in Bethel. The steamboat is reported to have made trips daily from Bethel Hill to Hastings' Ferry (near the present Route 2 "Androscoggin" rest area), but the hazard of annual log drives on the Androscoggin, coupled with severe droughts in the summers of 1892 and '93, greatly hindered its use. Added to these obstacles was the fact that the "Rips" at Newry Corner could only be negotiated at high water. By May of 1894 this steamboat had been "dry-docked for an unlimited time." Though several of our oldest residents claim to have seen the "North Star" on the river after this time, the fate of the vessel remains unclear.