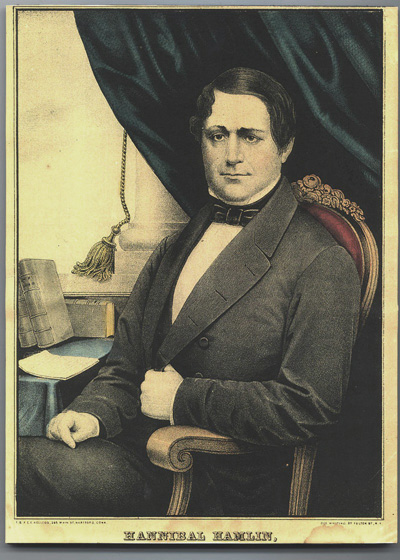 The 200th anniversary of the birth of Hannibal Hamlin, who was born at Paris Hill, Maine, on August 27, 1809, the son of Cyrus and Anna Livermore Hamlin, was officially commemorated last summer, at an observance at Paris Hill’s Baptist Church, not far from his birthplace. Hamlin, who was President Abraham Lincoln’s Vice President during his first term, was also a Maine governor and long-time U.S. Senator. His father, who studied at Harvard, was a medical doctor who combined that profession with farming; he was also the holder of numerous offices during his lifetime. Hannibal Hamlin was educated in the local schools and prepared for college at Hebron Academy until a change in the family fortunes made it necessary for him to try his hand at printing, teaching school and land surveying, before he decided to follow a career in law.

It was his good fortune to begin studying law under Samuel Fessenden, one of the leading barristers in the State of Maine and a fervent anti-slavery advocate. Admitted to the bar in 1833, Hamlin soon settled in Hampden (near Bangor) where he lived for a good part of his life and developed a large legal practice. Initially a Jacksonian Democrat, he represented Hampden in the Maine House of Representatives and later became Speaker, where he established a reputation as conservative and cautious in his mindset. In 1842, he ran successfully for the U.S. House, where he served without particular distinction for four years. Here he was decidedly anti-slavery, but like many of his contemporaries regarded that institution as beyond the legislative authority of the federal government. To his eternal credit, however, he opposed any attempts to suppress free discussion. Elected to the U.S. Senate in 1848 to serve out the term of John Fairfield, he eventually became dismayed with the Democratic party and in 1856 became a Republican. That same year, he was elected Governor of Maine, but soon resigned to accept a new term in the U.S. Senate, where he became increasingly prominent in the anti-slavery crusade. This helped him attract the attention of Lincoln and was useful in making him the President’s running mate in 1860. As Vice President he presided over the Senate with ability and dignity and identified with the Radical Republicans.

Hamlin took a strong interest in the developments of the Civil War, actually serving while Vice President as a Private at Fort McClary in Kittery during the summer of 1864. After being dropped for a second term on the ticket, he was engaged as a collector of customs in Boston, and a railroad president before going back to the U.S. Senate, where he served from 1869-1881.

Hamlin’s professional career concluded with an appointment as Minister to Spain, 1881-1882. He died in Bangor on 4 July 1891 and is buried there in Mt. Hope Cemetery. Hamlin was married twice, first in 1833 to Sarah Jane Emery who died in 1855 and, second, in 1856 to Ellen Vesta Emery, a half-sister of his first wife. He had five children with the first wife and two by the second. Personally, Hamlin had many attractive qualities that allowed him to retain a large group of admirers. He was described as a “born Democrat,” and an engaging conversationalist who was an inveterate card player and dedicated smoker. A man of stocky and muscular frame, he bore such a swarthy complexion that there were rumors in the 1860 campaign that he possessed African-American ancestry. He was also an expert rifleman and skilled fly fisherman. It is also said of him that 2 he wore “a black swallow coat” and “clung to the old fashioned stock long after it had been discarded by the rest of mankind.”