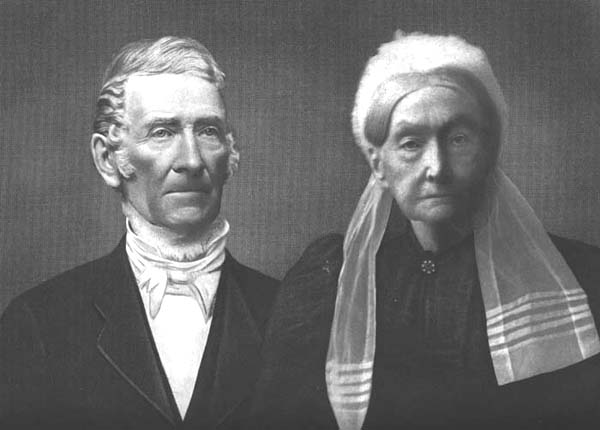 Hon. Robert Andrews Chapman, the second owner of the Bethel Historical Society's O'Neil Robinson House, and the grandson of Rev. Eliphaz Chapman, who suggested the name "Bethel" when the town was incorporated in 1796, was born 22 September 1807 in Gilead, the eldest son of Eliphaz, Jr. and Salome Burnham Chapman. As a child, he attended Gilead schools and later Bridgton Academy, taught a few winters in district schools before becoming a clerk in the store of O'Neil W. Robinson at Bethel Hill. The store is believed to have occupied the site of the present Bethel Library, and was destroyed by fire in September 1864. Chapman was employed by Robinson until 1836 when he purchased the property and operated the store with his brother Elbridge, who later moved to Portland in the 1850s, where he died in 1868. After his brother's departure to Portland, Robert Chapman admitted Enoch W. Woodbury as a partner. From his store and other business ventures, Robert Chapman became the wealthiest citizen of Bethel. A staunch Jacksonian Democrat, he later became a temperance advocate and spoke on that issue throughout the State. He never permitted liquor of any kind to be sold in his store. In 1850, he was elected to the State Senate and re-elected the following year. Here, according to his obituary in the Oxford Democrat for 13 April 1880, he "distinguished himself for his usefulness and ability in matters of legislation." From his work in temperance, he later became a Republican. As an avid Congregationalist devoted to his home and family, he was long active in that denomination and was also very public spirited. He married Frances Carter, daughter of Dr. Timothy and Fanny Freeland Carter, on 28 March 1833, and they were the parents of six children. Born 1 September 1809, she lived to the age of ninety-two.

In his History of Bethel, Dr. William B. Lapham recalled Chapman as "one of the most industrious of men." He continued, "When I was attending school in Bethel, I was in the habit of occasionally rising, going to Paradise Hill to have a view of the gorgeous sunrise seen from that point, and I never passed Mr. Chapman's place in the early morning twilight, without seeing him about his chores, milking his cows, and feeding his horses, or at work in his garden, and getting ready for the day's employment in the store. He was correct in his habits, strictly temperate, a liberal supporter of, and a constant attendant at the Congregational Church. Mr. Chapman was not a politician in the modern sense of the word. He never felt that he could afford the time to hold office, his own private business being sufficient to absorb all his time. In the time of the old parties, his sympathies were with the Democrats, and as such he was elected to the State Senate in 1850, and re-elected the following year. When the third party in Oxford County was organized in the interest of prohibition of the liquor traffic, Mr. Chapman joined the movement, and he followed, when that faction became absorbed in the great Republican party in 1855. Mr. Chapman was tall and erect, but slender, lithe and active in all his movements—a marked face and figure which impressed one at once as belonging to no ordinary man. His penetration and sagacity, coupled with his activity and perseverance, would have assured success in any profession or business he might have chosen, but he chose mercantile pursuits, and in his success outstripped all his predecessors and contemporaries. Probably Bethel never had a clearer-headed businessman than Robert A. Chapman." As the town's most prosperous resident, he was, according to his Oxford Democrat obituary, considered the "model of industry, integrity, and good citizenship." He built so many buildings in the town, it was said of him that "the village of Bethel grew up with him." He died in Bethel 7 April l880, and is buried in Portland's Evergreen Cemetery.