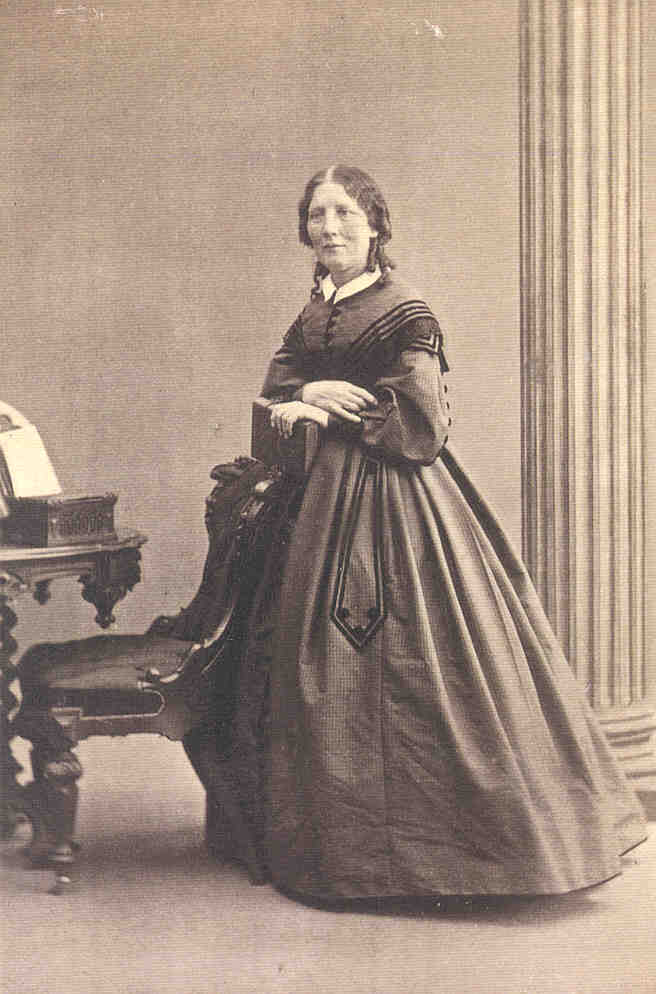 Editor’s Note: The letter quoted below was apparently written by Harriet Beecher Stowe (1811-1896) in the summer of 1852 after the appearance of her most famous book, Uncle Tom’s Cabin, in April of that year; she wrote at least a portion of her celebrated volume in Maine where her husband, Calvin, was a professor at Bowdoin College. Mrs. Stowe, to whom President Lincoln was alleged to have said, “so you are the little lady who wrote the book that created this great war,” was a frequent traveler and keen observer of life in America and Europe, possessing a thoroughly reliable ear for words and conversation in the tradition of other New England local colorists such as Sarah Orne Jewett. She recorded some observations of life in Bethel, Oxford County, and the surrounding countryside, which appeared in The Portland Transcript for 25 September 1852 with this preface: “Mrs. Stowe sends another delightful letter from Maine.” The entire text is printed below. For those wishing to learn more about Mrs. Stowe’s life and literary pursuits, see Forest Wilson, Crusader in Crinoline: The Life of Harriet Beecher Stowe (Philadelphia: J. B. Lippincott, 1941) and Joan D. Hedrick, Harriet Beecher Stowe: A Life (New York: Oxford University Press, 1994).

These nooks and hollows among the mountains produce a race of intellectual activity.

You go into a plain farm house, where the furniture and all the appurtenances retain the most primitive simplicity—but be not surprised if you see Latin, Greek, and German books lying on the table. You look inquiringly, and are told perhaps a certain Mary or Maria, who is keeping school up at Umbagog, or out of the way place, whose books are these. She has long done using them—she got them when she first began; now she has left them for Cynthia or Louise, or some other fair successor in the family line, who is equally hardy and energetic in her attacks upon the tree of knowledge. Ten to one you get a glimpse of said Cynthia, who proves a slender, blue-eyed girl, trimly dressed, with a pair of very pretty earrings in her ears, and an air of quiet composure, and savoir faire which shows you she is princess of the blood in her regions. You talk with her, and find she has a mind as sharp and bright and keen as one of the quartz crystals among her own mountains. She has been to the academy in the neighboring town. She has a fancy for drawing, and maybe shows you a crayon head or a landscape, which you did not expect to see just then—she wishes she could learn more about it—she has a cousin who paints in oils—she thinks perhaps, after she has taught a quarter or two, she will save enough to get to Portland, and take lessons of a master.

One is struck with the intellectual activity of the Maine woman, wherever he travels among them. A friend of mine told me the other day that in one of one of the towns where he was visiting, in the clergyman’s family, he was surprised to find the walls decorated with oil paintings which he thought it quite beyond the means of his friend to have purchased. “Where did you get these paintings?” he asked. “Oh, these! My wife painted them!” was the reply.

The same gentleman relates that another time, when hospitably entertained in an obscure settlement, far out in the woods of Maine, being struck with the domestic talents and agreeable manners of his hostess, he entered into some conversation with her. Knowing he was connected with the collegiate institution in Brunswick, she inquired with great interest after a young gentleman there, adding as an apology for her inquisitiveness, “I feel interested in that young man, for I fitted him for college.”

My friend, of course, thought she alluded to some such fitting as knitting his stockings, or making his shirts—and made a remark to that effect.

“Oh, no,” said the lady composedly, “I mean that I taught him Greek and Latin, and so on, and of course I should wish to hear that he was doing well.” It seemed to be quite an off course affair to her, nothing to what she could do. I can assure you, by the by, that these women are yeomen housekeepers, and that you will never taste the Latin and the Greek in sour bread or bad butter, or see the drawing looking out of holes in dresses.

The fact is, that sterile soil and a harsh climate though not good for growing anything else are first rate for raising men and women; and men and women, in the full, emphatic sense of the word, are the staple produce of Maine. The long cheerless winters here are powerful educators, both physically and morally—physically in the amount of oxygen and vitality which they form into the system, intellectually in the leisure which they force on one for intellectual pursuits. Apropos of the winters, I will relate an anecdote which I heard in my village under the mountains, which might give some of our Southern friends a new idea of what a winter here is like.

Said one of our friends, whose house lies directly under the mountains—“Last winter the snow was banked up quite to the ridge-pole of the house.” “Is it possible?” I exclaimed. “Why, what did you all do?” “Tunneled though it!” said my friend composedly. “We had a tunnel some fifteen feet to the road.” “And pray, how long did it last?” said I. “Well about six months,” said he. “It made the house very warm indeed,” added his wife, “almost oppressive.”

This was one view of a snow-bank that had never suggested itself to me. But I must add to what I said about the Maine women and girls, one drawback—one is impressed with it even in the most mountainous districts—the want of an appearance of robust health. The young girls are fair, sparkling intellectual-looking, but they are wanting in physique. They look like the forest flowers—very fair but as if a breath might wither them. The mind seems altogether to have got the start of the body. The long winters may have something to do with this. For more than half of the year, the female sex in this climate are in-doors, in stove-heated rooms, generally very partially ventilated, as rooms in cold weather always are. Here they read, and study and sew—and go out most, only in the pleasant weather—often only in sleighs, with fathers and brothers to drive them, and the sleigh is a vehicle that gives no sort of exercise. Can we not see in this fact the reason for the predisposition to diseases of the lungs which is constantly the terror of every parent in New England, and which seals every year hundreds of her fairest for the grave? Think of the contrast between the stove-heated room, where one is kept almost at the point of perspiration, and the lungs constantly inhaling warm air, and the sharp, keen, cutting air that is breathed without. There is no remedy for this, but a hardier habit of life. A young girl in New England is never secure against consumption, but by keeping her physical vigor up to the highest point. She should go out regularly every day, in all weathers, and familiarize her lungs with the outdoor atmosphere. She should fortify her skin with daily cold bathing, wear short walking dresses, prefer walking to the sleigh, practice skating and outdoor amusements, after the example of European ladies in a similar climate—and then the long winter will be to her, as it is to the other sex, a discipliner and invigorator of the system, and not a constant enemy.