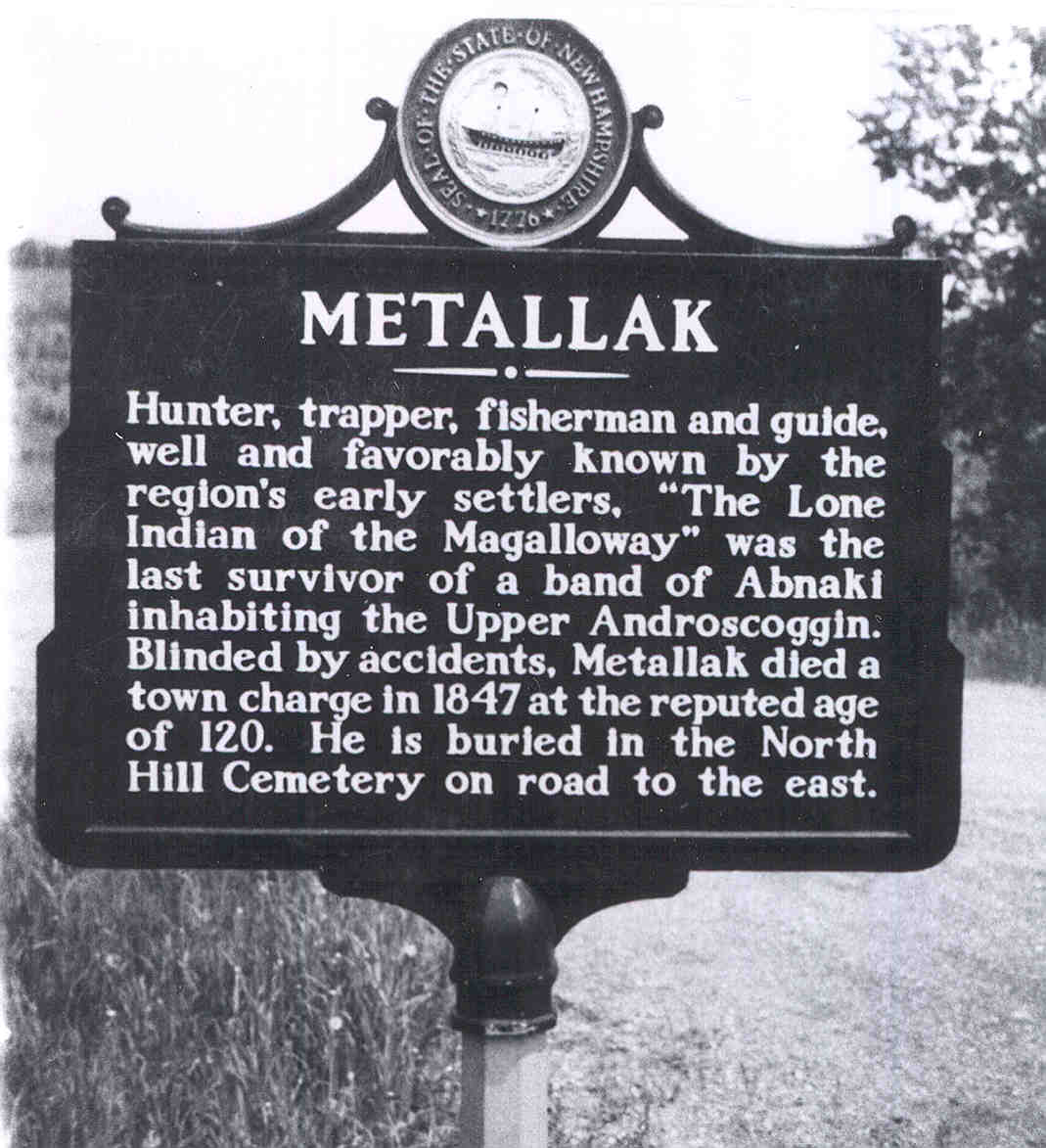 Editor’s Note: This brief memoir about the Indian Metallak is found in the Oxford County Advertiser of 17 January 1890. The author is Peter Smith Bean, who was born in Bethel on 23 March 1824, the son of Daniel Bean, Jr., of Bethel and Betsey Smith of Newry. He died in the G.A.R. Home in Cadott, Wisconsin, on 11 October 1911. His paternal grandparents, of whom he speaks in this article, were Daniel Bean, Sr., of Chester, New Hampshire, and Margaret Shaw of Hampton, New Hampshire. By accident of birth, each of these three fathers (Bean) found themselves of age to serve in the great war of their generation, Daniel Bean, Sr., was a veteran of the American Revolution; Daniel Bean, Jr., was a veteran of the War of 1812; and Peter Smith Bean served in Company D, 6 Iowa Cavalry, during the Civil War. Peter Smith Bean enjoyed sketching verbal images of Maine life in the early 19th century. He spent his formative years in the wooded surroundings of Upton, Maine. After moving to Wisconsin, where he married, had a family and enlisted in the military, he returned to Oxford County for a time. Eventually, he ventured back to the midwest, where he spent the remainder of his life. While living in Wisconsin, he kept up with the doings of his native state by subscribing to the Oxford County Advertiser, which ran recollections of old-timers from the area. The sketch below was among Bean’s first of many. His recollections of the characters and events of life in Maine’s northwestern forest and lake lands are useful additions to our local lore.

The first Indian I ever remember of meeting was Metallak. I remember of his stopping at Father’s when he lived at Middle Intervale in Bethel. Father had a cabinet shop at that time. I think it was the summer of 1827. Metallak was going to see Siah Bean, an uncle of Father’s.

After we moved to Letter B (Upton) grandfather, Daniel Bean, sen., had gone there before that. Metallak was often at our place and he and grandfather were great friends. He lived in sight of grandfather’s but across the lake [Umbagog], some three miles away on Metallak Point. He always stopped when he was going to Andover and Bethel, which was quite often.

On such trips he left all the small game that he shot between the Point and our place. It consisted of ducks, geese and partridges. He would say “me eat with you when I come back.” On his return trip he was generally there at dinner. He was always welcome.

I have sat on his knee many a time, he trotting and talking to me. He used to bring lumps of spruce gum. I remember how he looked sitting on the porch with grandfather and smoking their pipes as friendly as two brothers. Father said Metallak was an old Indian when he first saw him. As I remember him he was a rather tall straight Indian when [we] first saw him, very quiet, hardly ever laughed or smiled, kind hearted and one to be trusted as a friend in honesty, liked by all who knew him.

He had two sons, the oldest was named Wilumpa, the other was Parmayillet. They often used to bring things that they did not want to use during the summer over to our place and hang them up in the roof of the barn until fall, while they were upon their fishing and hunting tour to the Upper Lakes, sometimes not returning until fall, then taking them to their winter camp for use during cold weather.

About 1829 or 1830, his two sons went to Canada, but could not persuade Metallak to go with them. From that time, he made his home on the Upper Magalloway most of time living alone. He made occasional visits to Andover and Rumford to dispose of his furs and pelts, always stopping to see grandfather to have [a] smoke and a glass of rum.

I never saw him take only one glass at a time. If asked to take more he would say “one plenty.”

Metallak was silent for a long time, the tears running down his cheek. He looked up saying, “Daniel gone to the happy hunting ground and left Metallak. He same as brother. Me go soon. Me know old man Daniel long ago when he first came to Bethel. Me old Indian then. He gone and left me. I know young Daniel when he small papoose. Siah Bean dead, Daniel Bean dead. Me dead soon. Me old man die soon. Me never come here any more.”

He went to his camp on the Magalloway. It was near Nat Bean’s. Afterward he fell and put out one of his eyes on a stub by his camp which caused the loss of both eyes. The neighbors went to the camp and found him helpless. They took him to Nat Bean’s and notified his daughter in Canada. She came with a team and took him back home with her. His daughter married a Frenchman and was well off. That is the last I ever saw of Metallak.