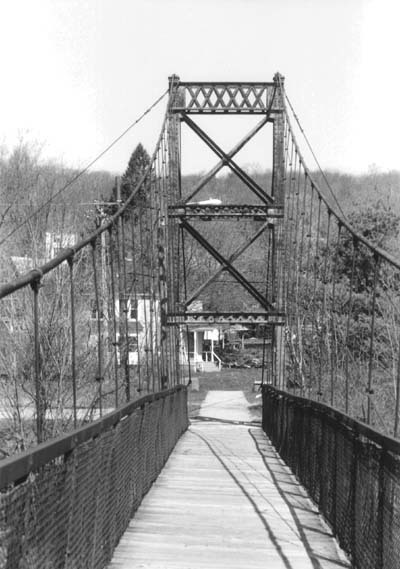 The "Swinging Bridge" was originally built in 1892 for workers walking over the Androscoggin River from the Topsham Heights neighborhood to Cabot Mill in Brunswick, Maine. The bridge was constructed in 1892 by John A. Roebling's Sons Company, the engineering firm that designed and built the Brooklyn Bridge, among others. In the early 20th century, the present steel towers replaced the original timber-framed towers. A flood destroyed the superstructure of the bridge in 1936, and it was rebuilt in 1938 by the WPA, although the suspension cables date back to 1892 when the bridge was first built. The Towns of Brunswick and Topsham created a joint committee to repair the bridge in 2000 and this renovation was completed in early 2007.